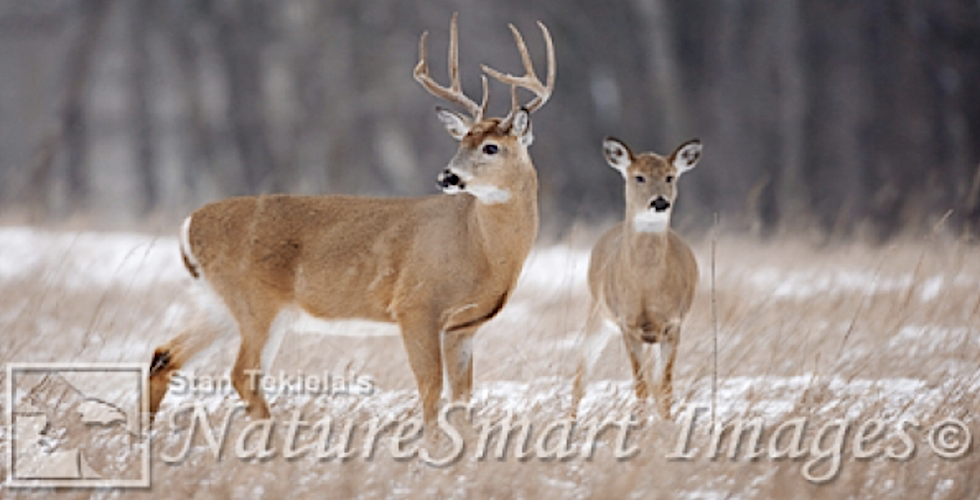 A Study of White-tailed Deer Behavior

Wildlife photographer and naturalist Stan Tekiela has been spending a lot of time in the woods, studying and photographing White-tailed Deer behavior. Here is his report.

The White-tailed Deer is the most widely distributed member of the deer family, found throughout the United States, much of Canada, and, believe it or not, as far south as Peru and Bolivia in South America. It has also been introduced into several countries in Europe and New Zealand, along with parts of the Caribbean.

A good example of this is the Key Deer, a subspecies of the White-tail that lives only on Florida’s key islands. This subspecies looks just like all other White-tails, except that it’s one-quarter of the size of a regular White-tailed Deer. An adult male Key Deer weighs only 50 pounds. This is a clear and obvious difference, but not all subspecies are this clear-cut.

I’ve been spending a lot of time in the woods lately, studying and photographing White-tailed Deer behavior. During the breeding season, the males, called bucks, are focused on finding females, called does, and often allow for closer observation. Recently I went out for a walk in the woods to get some exercise and stumbled across a nice 10-point buck who was attending a female. I hung around just long enough to see that they looked comfortable and didn’t seem to be going anywhere. I continued my walk; an hour later when I was returning, I found the buck and doe right where I left them. I figured this is a good sign and headed for my truck to grab my camera gear. Fifteen minutes later when I returned with my camera and prepared to capture some great images, the buck and doe were nowhere to be found.

Several days later I headed out to see if I could find another big buck. I walked for a mile or so and spotted two does with their heads down, feeding on the few remaining green plants. I figured there is a good chance a buck might be attending the females. I approached from the down-wind side so they couldn’t smell me. As I approached, I noted that the sun was now behind the deer, which usually doesn’t make for good pictures. But I wanted to check them out anyway.

As I approached, I caught a whiff of a rutting buck. When the bucks are looking for females, scent glands located on the male’s hind legs produce a sweet yet pungent smell. If you get close enough and the wind is in your direction, it’s easy to pick up this scent. As soon as I caught the scent of the buck, I saw him standing in a tangle of branches and vines. His thick winter coat and tall multi-branched antlers made him blend so well that it was hard to see him.

I was able to capture a few images of the buck and, more importantly, spend some time studying the behavior between the buck and the doe. This kind of quality time is hard to come by, so I enjoyed it while it lasted and eventually headed back to my truck for the long drive home.