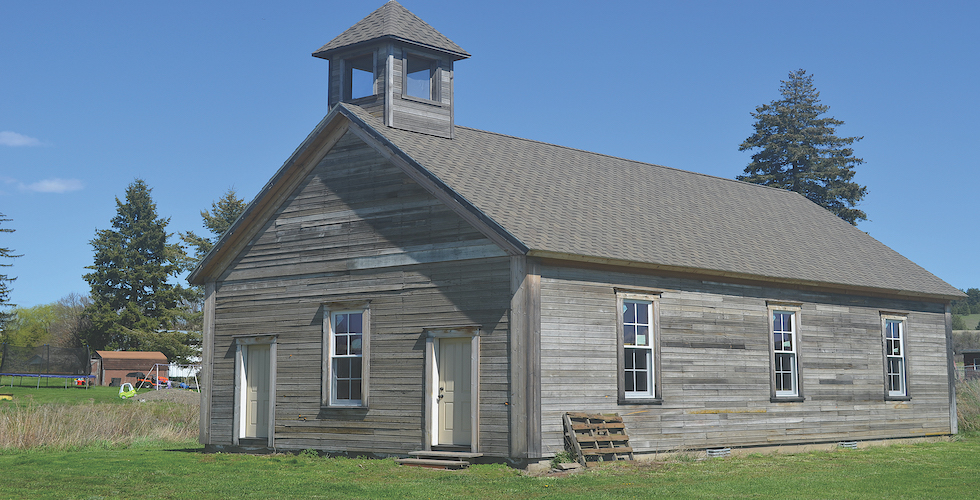 Discovering Waverly, A Town with a Population of 106

Today, Nicole Hardina, author of Little Washington, takes us to the town of Waverly. Founded in 1879, the town has a population of 106.

A Complicated Past
The town of Waverly received a post office and a name in 1879. Then, while other Inland Empire towns met the railroad and began to flourish, Waverly remained a lonely outpost. An early history describes it as a “little village, quiet and serene . . . remote from the scenes of turmoil and strife.” However, Waverly’s most prominent feature speaks to a history that is anything but bucolic.

Hangman Creek winds through Waverly. Uncultivated land approaches the creek’s edge. Farmed acres stop for a treeline, a rocky butte, and a soft marsh. The water looks as though it might spill over its edges, glimmering gently past farmhouses. The name was long ago changed to Latah Creek, but it’s still widely known as Hangman—and for a reason. The Spokane Historical society isn’t pulling any punches in its description: “This is the site of a murder.”

In 1858, the Spokane and Yakama tribes resisted treaty terms, and violence erupted in Eastern Washington. When the tribes defeated Colonel Steptoe’s 150 men, Colonel George Wright sent hundreds more in their place. Chief Owhi, whose son, Qualchan, was wanted for murder, tried to negotiate with Wright, who took Owhi hostage. Not knowing Wright had imprisoned his father, Qualchan entered the camp on his own peace mission, along with his wife, son, and brother. Wright ordered Qualchan hanged. The next day, Chief Owhi tried to escape and was shot and killed. In three days, Wright ordered the hangings of more than a dozen people, all of whom had approached with a white flag, symbolizing their peaceful intentions.

By the time A. D. Thayer homesteaded on Hangman Creek, evidence of the violence was long gone. Two decades later, Waverly began to flourish. The Washington State Sugar Beet Factory, established in 1898, employed 150 men. The Waverly Optimist reported in 1899 that laborers made $1.50 per day, while “skilled superintendents” earned as much as $7,500 per year, or more than $250,000 in today’s dollars.

A dam across the creek fed water to the factory. Soon the railroad came, and multiple grain producers established warehouses and elevators in Waverly. In 1900, the population had blossomed to 895. Ten years later, the sugar beet factory closed, and the bloom began to wilt.

School’s Out
In Waverly today, Hangman Creek Bar and Grill is closed and boarded up. Peeling signs in the windows upstairs advertise Miss Elsie’s 5¢ baths and Doctor Yankum’s dentistry services. Concrete memorials at the park’s edge remember beloved townspeople and war veterans. In 1935, the Spokane County Pioneers Association established a memorial at the site where the hanging tree once stood.

In 1910, Washington state had more than 2,700 school districts. Not quite a century later, that number has declined by about 90%. Spokane County had some of the first schools in Washington, dating to the 1830s. The first schools often took place in settlers’ homes until a community secured funding for a dedicated building.

As the population increased, communities often abandoned their log cabin schools in favor of wood frame and, later, brick schools. As the student population grew, schools diversified, distinguishing elementary and junior-high education programs and locating them in their own schools. By 1915, Washington boasted 500 high schools.

The boom in school construction continued until the Depression, when a lack of funding put the brakes on school spending. Despite funding scarcity, many new schools were built in the 1930s as part of the Works Progress Administration. Even with the government-sponsored infusion of capital, by the end of WWII, school consolidations in rural areas had begun in earnest. After the war, urban centers grew at the expense of rural communities, and by 1946, nearly all one-room schools had closed. The Prairie View school in Waverly was one of them.

From 1904 to 1938, the school served as many as 40 students in a year. The simple, wood frame building boasted an iron stove for heat and a curved stage for the teacher’s desk. Prairie View is the oldest example of its kind in Spokane County. Long since fallen into disuse, the school malingered in a cottonwood grove, its porch sagging, wind rushing through its empty windows. Then, in 2013, preservationists decided to move and restore the decaying school. With a fundraising effort that garnered thousands in private donations, the southeast Spokane Historical society led the effort to preserve the history of public education in eastern Washington. Today, the school has a new foundation and a new roof. A modern door stands between the weather and the schoolroom. The clapboard siding is original, but the windows are brand-new. If left abandoned, nature would have taken the school back. After years of snow and neglect, the roof would have collapsed, and then the walls. Instead, the Prairie View school stands on the corner of South Prairie View Road as it curves out of, or into, town, like a greeting or parting message for visitors.

Waving Goodbye
Driving through any city’s residential neighborhoods between the hours of 8 a.m. and 4 p.m. can be a slow affair. When children are present, the speed limit usually tops out at 20 miles per hour. In Waverly, the school has been closed for a long time. Still, a hand-painted sign asks travelers to keep it under 25 mph. A father shepherds two children and a dog on the short walk from the park to their home. He holds the kids’ hands and they stick to the sidewalk, though mine is the only car on the road.

Waverly is the smallest incorporated town in Spokane County, and it feels like it. Visitors to Waverly might be forgiven for looking around and asking, “What makes a town a town?” There is a fire department, a Grange, and evidence of agriculture. Other than that, there’s a collection of houses, a controlled burn, a barking dog, a shuttered door, a babbling stream. There’s history here, for sure. A future feels less certain.