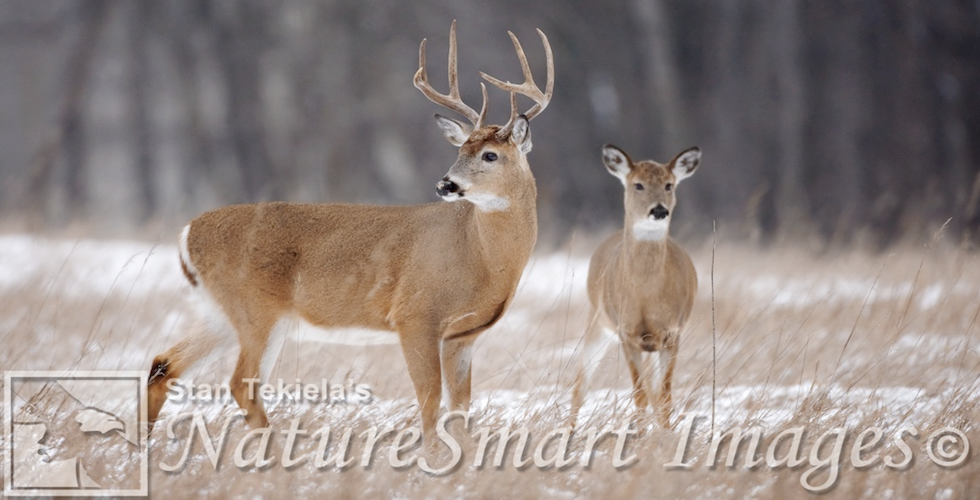 White-tailed Deer Antlers Fascinate, but Why?

Naturalist and wildlife photographer, Stan Tekiela, shares with us the many reasons why White-tailed Deer antlers are fascinating.

Hopefully you have survived another holiday season and now snow blankets the woods and farms throughout most of the country. Winter is here and the White-tailed breeding season, called the rut, has come to an end for another year. However, the big White-tailed bucks are still wondering the woods lugging around their antlers like old worn out trophies.

For whatever reason, people are fascinated with white-tailed deer antlers. I understand this, I have many deer antlers in my office. But just exactly what are antlers? Antlers are actually very simple. They are made of solid bone. Only members of the deer family, Cervidae, grown antlers. Except for Caribou (Reindeer), only male deer have antlers, with the odd exception of a rare female with a hormonal imbalance which sometimes grows a set of small antlers. Antlers are the fastest growing bone in the natural world and depending upon the species can grow as large as four to five feet long and weigh several pounds.

All antlers start from a small swelling on a male deer’s head called a pedicel or antler bud. These first appear as a tiny twist of hairs on a young male fawn’s head and are visible from nearly the time they are born. It’s the pedicel that is the key to a large antler. For example, young male deer with poor nutrition or are deficient in testosterone have small pedicels and therefore small antlers. Males with more testosterone will develop larger pedicels and larger antlers.

The size of a deer’s antlers depends upon age, nutrition and inherited traits. Antlers start to grow in early spring. The growth is triggered by the length of daylight which kicks off hormones in the deer’s body. From the beginning the newly growing antlers are covered with a network of blood vessels and nerve endings that is called “velvet” because it looks and feels like velvet or suede.

The rapidly growing antlers, upwards of an inch per day, receive blood through the velvety skin and also through an inner core vessel. The velvet is very fragile and tender and bruises easily and bleeds if it is damaged and even suffers frostbite if frozen. So, a buck must remain careful during the growth period of several months. This means no sparring with other bucks or running into tree branches. If an anther is seriously damaged during growth it will be deformed in the place of injury. What is really amazing are antlers will also “remember” an injury from the past year and going forward the antlers will also be deformed as long as the buck lives.

As amazing white-tailed deer antlers are, what is more amazing is how the antler grows. Researchers have proven that a buck must borrow large amounts of calcium in the formation of the antler. Calcium is the chief component of antlers, and it must get it from somewhere. And the place where this calcium comes from is the ribs and sternum. So much calcium is taken from the ribs that the ribs become brittle and often break during the critical antler growing period. However, the research also shows that a healthy buck takes this in stride and fractures heal smoothly and with minimal discomfort.

This movement of calcium from the buck’s bones to the antlers is amazing. In fact, it’s so amazing that researchers are looking at antler growth as a way to give us insight into issues that effect humans such as osteosarcoma (bone cancer) and also osteoporosis (a serious bone disease of older women). If we could figure out a few things we might be able to solve a lot of bone issues in humans.

Very recent research indicates that the rapid annual growth of antlers is caused by a combination of cancer-linked genes and the strict regulation of this growth by a cancer suppressing genes. This discovery my open a new way to treat cancer growth in humans.

The researchers found the growth of antlers was more like bone cancer than normal bone growth. However, the difference was bone cancer grows unchecked while antler growth appears to be tightly regulated. The genes involved in the regulation were related to a well-known tumor suppressor gene. The tumor-suppressing genes may help protect deer against getting cancer. In fact, deer are 5x less likely to get cancer than other mammals, suggests the geneticist who published this results. Either way, it seems to me that we have so much to learn from nature.