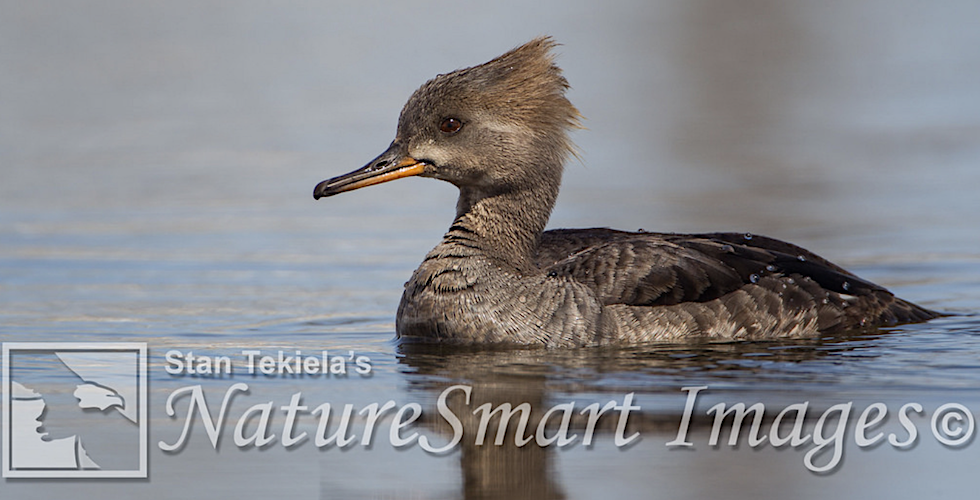 It’s Looking Like a Good Spring for Hooded Mergansers

Stan Tekiela shares with us the amazing world of Hooded Mergansers. Read on to discover their world through his lens.

The spring bird migration is like a high-speed race or sprint when compared to the fall migration. Birds returning to the northlands are racing against others of the same kind. The first to the best territories and habitat will win the reproductive lottery.

As a photographer, I will work these limited open-water resources to capture some images of normally shy waterfowl. Lately, I’ve been working on photographing Hooded Mergansers (Lophodytes cucullatus). Often just called “hoodies,” these small ducks are the only members of their genus, which means they no longer have any living relatives (closely related species).

Both the male and female have crests on top of their heads, but it’s the male’s bright white crest that you notice when you first see these waterfowl. They are tiny ducks and are, in fact, the smallest of all the mergansers in North America. In addition, hoodies are only found in North America.

Hooded Mergansers are not long-distance migrators. They winter in the eastern half of the country in states where lakes don’t freeze. In spring they head to small bodies of water where they will breed. They need clear water because they are diving predators that hunt by eyesight under water. Small fish make up 60-80% of their diet. Aquatic insects, crayfish, and crabs make up the rest.

Unlike most ducks, hoodies are cavity nesting birds. Males stay with the female right up until she selects a nest cavity and begins to lay eggs. Females seek out natural cavities in trees for nesting but will also use man-made nest boxes such as Wood Duck boxes. Females lay anywhere from 7 to 15 eggs. They will also “dump” some of their eggs in Wood Duck nests or in other female hoodies’ nests. This is called nest parasitism. Think of this as not wanting to put all of your
eggs in one basket!

Like most waterfowl, hoodie babies hatch ready to go (precocial). They are covered in downy feathers and jump from their nest cavity to follow their mothers. The baby hoodies don’t need to be taught what to eat—they just simply start foraging for small aquatic insects while they follow their mothers around.

Just like Wood Ducks the young hoodies often jump from incredibly high nesting cavities about 24 hours after hatching. While most wooden nest boxes that are provided for them are less than 10 feet off the ground, natural cavities in trees can be upwards of 25 to 30 feet high. Because the babies are so lightweight, they aren’t injured when they hit the ground after jumping from the nest. In fact, they slightly bounce before getting their feet under them and running off to catch up with their mother.

This spring I have been spending a lot of time covered up in camouflage cloth or hunkered down inside a blind next to the shore of shallow lakes, waiting for the first hoodies that have returned. One of my favorite things is watching the male display for the female. He swims by her and expands his white, sail-like crest, while giving a low gravelly call. He always looks very impressive.

He won’t leave her side for several weeks until she selects a nesting site and begins to lay eggs. It is looking like a good spring for Hooded Mergansers.