In today’s post, naturalist and wildlife photographer Stan Tekiela talks to us about the North American beaver. Find out more about this amazing semi-aquatic animal.

Walking on gravel in the dark, I was trying not to make any noise. I could kind of see where I was going, but, when you are carrying heavy and expensive camera gear, you always want to be extra careful. Approaching the edge of the clear-water pond, I sat down and started to organize myself.

Thank goodness I was wearing my waterproof overalls. The ground at the edge of the pond was wet and muddy. With my feet resting in 2 to 3 inches of water, I was also happy I had on my waterproof boots. Recent rains had soaked the landscape and swelled the rivers.

Even though it was late summer, the morning temperatures in northern Alaska were in the low 40s. Two layers of clothing and a winter hat and gloves were essential, especially when sitting for long periods of time. 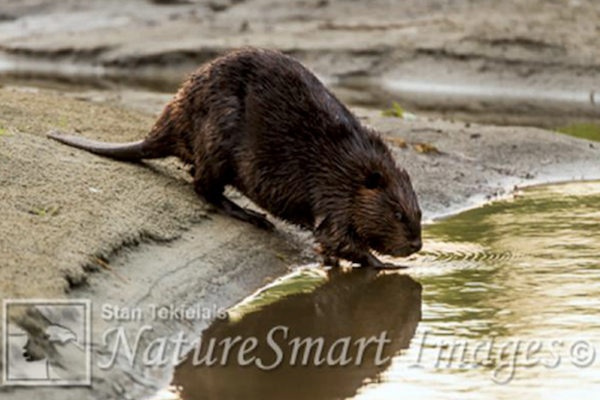 As the branch got closer, I could finally see what was pushing it. An adult beaver was swimming in the pond, bringing breakfast home to the family.

Beavers are one of my favorite critters. The North American beaver, usually just called a beaver, is only one of two beaver species in the world. It is native to North America but has been introduced to South America and also parts of Europe. It is the official symbol of Canada and the official mammal of the state of Oregon.

The beaver is the largest rodent species in North America and the second largest in the world. Adult beavers weigh 25-70 pounds, with the average adult beaver weighing about 40 pounds. They are semiaquatic animals that are well suited for life in the water. Beavers have a second eyelid that closes to protect the eye when swimming underwater but still allows the beaver to see. They have flats that cover their nostrils and ears when submerged. 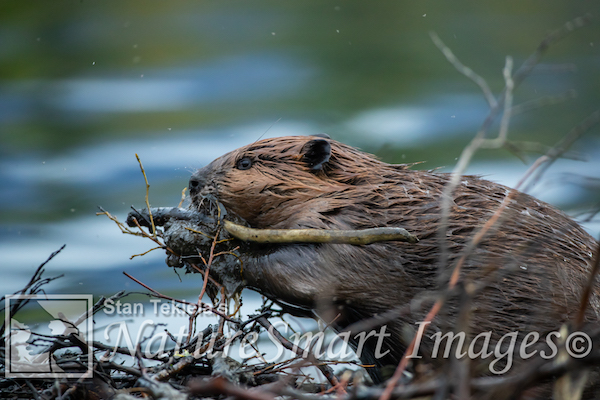 They have large webbed hind feet that propel them through the water, but their front feet are unwebbed with five moveable fingers and sharp claws. Of course, everyone knows about their large, flat, paddle-shaped tail. By the way, they don’t use their tail to pat down or shape their stick and mud dams.

For five days, I showed up before dawn and sat on the wet ground at the edge of the pond. Each time I covered myself in camouflage material so I wouldn’t alert the beavers. During this time I was able to capture some amazing natural behaviors of this family of beavers. 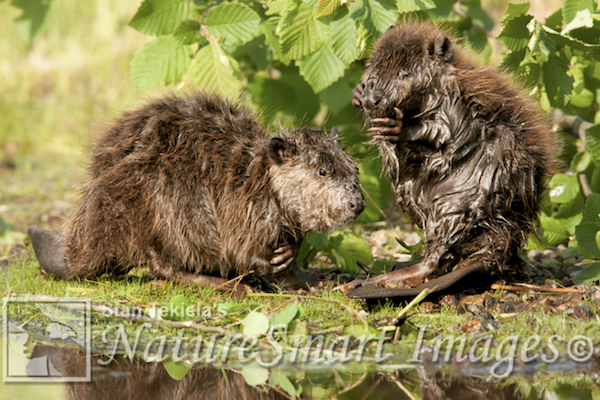 There were two adults and three juveniles. It was wonderful to watch the adults going about the business of gathering food for the coming winter. They would swim downstream from the pond to cut branches of willow. Then they would swim back to the den, which was just 50 yards away and around a corner.

Beavers don’t eat wood, as many cartoons might portray. They eat green leaves and the soft bark from smaller branches. The leftover woody branches are used in the construction of the dam. So, each day, I would watch the adults bring back some fresh branches for the family to eat. Later they would carry the bare branches, stripped of their leaves and bark, over to the dam. 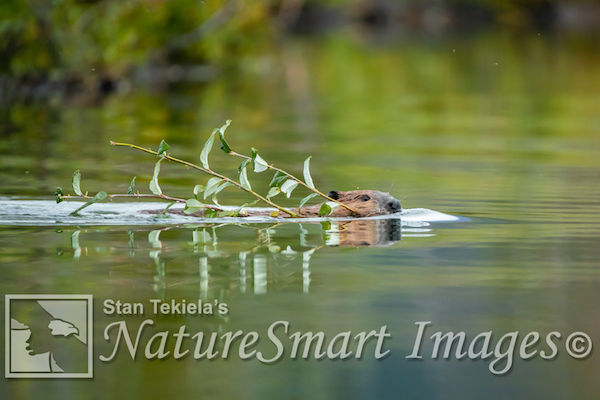 The adults would also dive down to the bottom of the pond to scoop up mud and rocks to add on top of the dam. They would also add more sticks. This dam was about 4 feet tall, holding back a wall of water. It was wonderful to watch the adults teaching the babies, called kits, to collect construction materials for the dam. Each time an adult would dive underwater, a kit would dive with him. They would both surface together, and the kit would swim alongside the adult until they reached the dam, then watch the adult pile the rocks and mud on.

Each morning they would work for about 2 to 3 hours, allowing me ample time to capture some wonderful images and video. Then they would head to their den to sleep the rest of the day. These were truly busy beavers!