Each winter Stan Tekiela makes a pilgrimage to his favorite winter wonderland, Yellowstone National Park.  Today, Stan shares with us his encounters with the clever Red Fox.

Everything from the tiniest critters to the largest predators inhabits the park, making it one of the few places with a complete ecosystem. I go in winter especially for the predators, both large and small.

One of these predators is the Red Fox. They are the smallest of the canids (dog family) in the park. About half the size of a coyote and just a fraction of the size of a wolf, the Red Fox (Vulpes vulpes) still manages to find a place to eke out a living. He is one of the most widely distributed members of the canids. They can be found throughout the Northern Hemisphere (North America) from the Arctic Circle to North Africa (nearly all of Europe) and Eurasia.

The Red Fox has been associated with humans for thousands of years, which has led to it being introduced to many parts of the world where it hasn’t existed before. Most recently, this fox arrived on the continent of Australia, where it is now considered an invasive species.

Even though they are called Red Foxes, they come in a wide variety of colors. They range from the classic rusty red to nearly all black. When dark they are often called a Cross Fox. They can also be blond to nearly white. But no matter what color they are, each color phase has one thing in common. They all have a white tip of the tail. In fact, this is the best way to tell a Red Fox from a Gray Fox. The Red Fox has a white tip of the tail and the Gray Fox has a black tip. 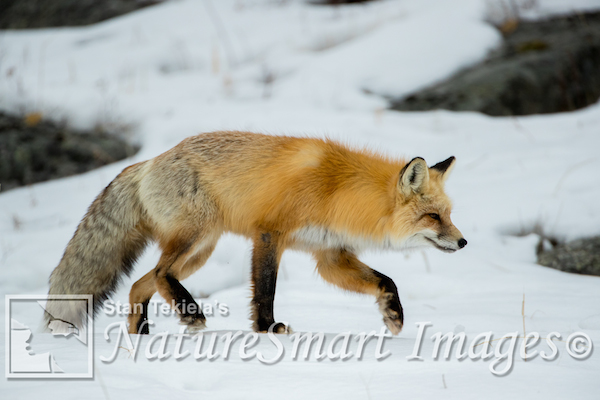 The male and female fox are similar in size, with the male being about 10-15 percent larger. This is often not enough of a difference to notice easily. An adult fox weights 10-25 pounds. This is much smaller than your average domestic dog. They are not large enough to represent any threat to people and rarely do they interact with family pets, unlike coyotes, who seem to target domestic dogs and cats.

Red Foxes have excellent eyesight and keen hearing, not to mention their amazing ability to smell. They usually hunt small mammals, such as mice, voles, and shrews. Typically, a fox will hunt by walking along and watching for any movement. They keep their head down, scanning back and forth. At the same time, they are using their ears to listen. If they find something, they stop and cock their head from side to side, pinpointing the exact location of the prey (even under the snow).

When they have locked onto the sound, their hind legs coil up like a spring and they launch themselves into the air, following an arch shape and coming down with their front paws and nose hitting the surface of the snow, first plowing through the snow to reach the hidden critter below. It is really a sight to be seen.

After nearly a week of searching high and low, I was able to locate a Red Fox near a narrow rock canyon. He was trotting along, scanning the ground, hoping for an easy meal. I moved to get out in front of the fox to capture images of him coming towards me, as images of animals going away are not as pleasing.

At one point, the fox walked in front of a large bull bison. The giant bison raised its head and watched the fox trot on by. The fox represents no threat at all to the bison, but it was fun to watch the interaction between the two.

I tracked the fox for a long distance while it entered a tall rock wall canyon. I was trying to capture some different images when it came across an old elk carcass that the wolves had killed a couple weeks before. The fox chewed on the old bones for a short time before moving over to a large rock and sitting down for a rest.

Eventually, it curled up and took a nap. This was my cue to move on and let the little guy rest. I was happy with the images I captured and the experience I had with this wonderful animal. 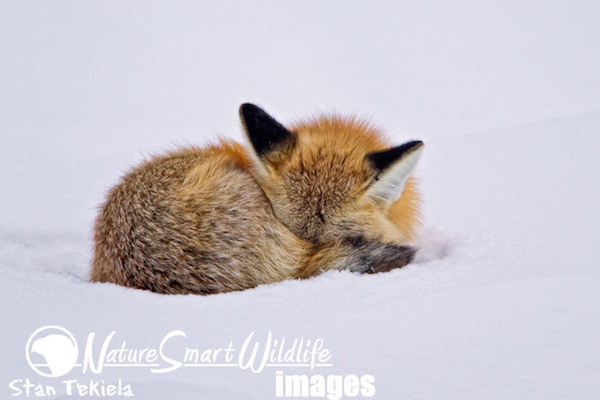