To some people, the roadrunner is best known as a fleet-footed cartoon character that is always outsmarting a wily coyote. The Greater Roadrunner is an almost mythical bird to anyone who hasn’t traveled to the American Southwest or lived there. It’s often a bird that you’ve heard about but never seen. And everyone seems to have all sorts of questions about the roadrunner. Does it really run that fast? Can it really outwit a coyote? 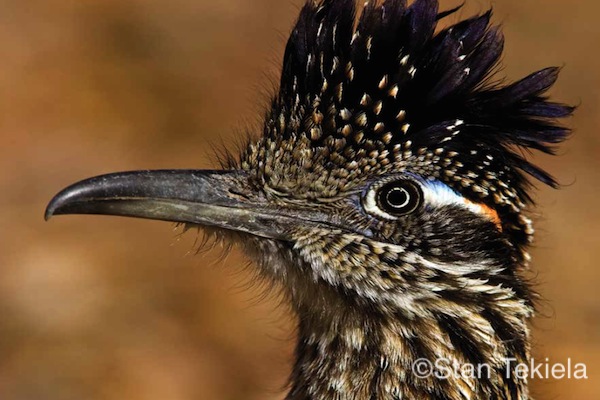 The roadrunner is an odd-looking bird with a long, narrow body, an extremely long tail, and long legs. A member of the cuckoo family (Cuculidae), it is, in fact, the largest of the cuckoos in North America. Sometimes it’s called the Ground-cuckoo because it spends most of its time on the ground and prefers to run rather than fly. Its scientific name, Geococcyx californianus , translates to “California Earth-cuckoo.”

Males and females look alike, but the males are slightly larger. These birds are capable of running upwards of 20 mph, which, believe it or not, is still not fast enough to outrun a coyote. It has been reported that the fastest roadrunner reached 26 mph. This is the fastest running speed of any bird that is capable of flight. Flightless birds can run much faster. 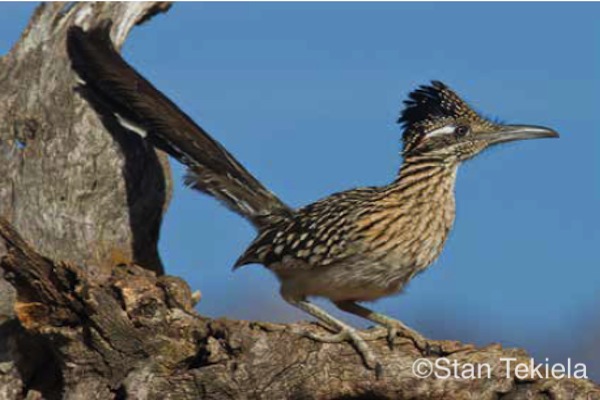 Roadrunners have large, uniquely shaped feet. While most birds have three toes that point forward and one pointing back, roadrunners have two toes forward and two back. They have what is known as zygodactyl feet. Roadrunners use their specialized feet to speed-run and catch small mammals, such as mice and shrews. They also hunt snakes, scorpions, spiders and other large insects. They have even been known to take on venomous snakes, such as rattlesnakes. They kill their prey by repeatedly whacking it against a rock before swallowing the item whole. 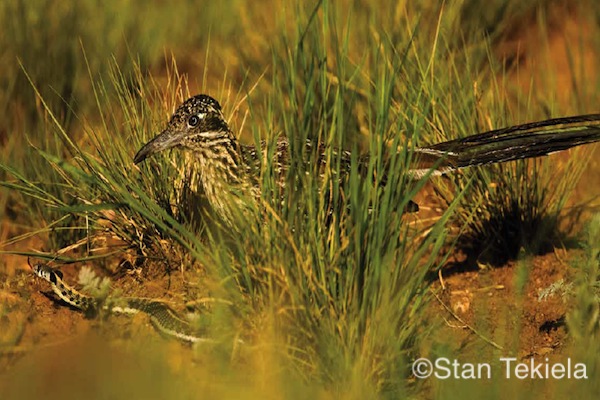 It is thought that roadrunner pairs stay together for long periods, perhaps many years, defending their territory together year-round. In late winter and early spring, males display for the females by wagging their tails back and forth and lowering their wings. A male will expose a pink and light blue patch behind his eyes and make a loud cooing sound while raising the crest on top of his head.

I remember the first time I saw a male displaying this elaborate dance to a female. I watched in fascination as he bowed his head nearly to the ground, exposing his brightly colored skin patch, while calling a slurred “coo-coo-coo.” The sound of that mating call was unforgettable, and I can recall it clearly to this day. 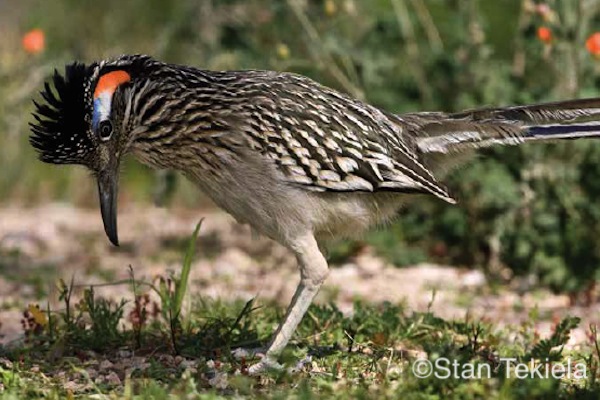 Many people have fun feeding roadrunners that visit their yards. Friends of mine once told me about a determined roadrunner that would come to their home several times a day and bump against their sliding glass door, begging to be fed. They would throw out cooked meatballs, which the bird immediately gobbled down.

If you enjoy birds you may also consider this post about baby birds, or some of Stan’s other amazing nature books:

More picture from the book can be found here. You can follow Stan on Facebook and Twitter, or contact him via his web page. Stan’s nationally syndicated NatureSmart Column appears in more than 25 cities spanning 5 states (Minnesota, Wisconsin, Michigan, Illinois, and Pennsylvania) and is circulated to more than 750,000 readers. Stan’s author page on Amazon features some amazing videos! Check them out, and follow him for updates.