In this week’s column, Stan Tekiela talks about one of his favorites birds, the Eastern Bluebird. 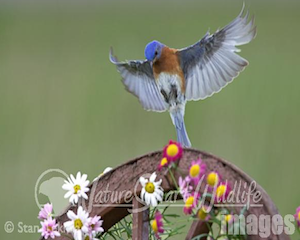 The warming winds of spring bring us many fun and interesting birds and critters. One of my favorites is the Eastern Bluebird (Sialia sialis). A member of the thrush family, the bluebird is closely related to the American Robin. In fact, you can see the similarities between these birds in the posture, body proportions, movements, and also in the matching rusty red chest.

Both birds are prolific insect eaters, finding most of their food directly on the ground. Because of this diet, these birds need to migrate to areas where they can find insect food during winter. Even though both birds are well known for migration, neither of them make long distance migrations like some birds such as the warblers or hummingbirds.

Eastern Bluebirds are late to leave in the fall, often staying around until Thanksgiving, and they return fairly early in the spring. They only migrate as far as they need to survive the winter, which means in some winters they may go only a couple hundred miles south.

Once nearly extinct due to the lack of available nesting cavities and the widespread use of pesticides, their downfall started in the 1930s and 40s. Some believe that the invention of the modern gas-powered chainsaw was the beginning of the decline. For the first time, individuals were able to efficiently take down dead or dying trees—and, along with them, the natural cavities that provided homes for the bluebirds. 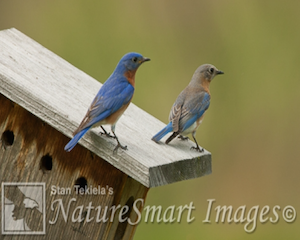 Most, but not all woodpeckers, use the cavity they excavate for nesting just once. This is a very interesting behavior when you consider the amount of energy it takes to chisel out these homes. But studies have shown that woodpeckers who reuse cavities have a lower chick survival rate. It’s thought that this lower survival rate is linked to increased parasites inside the used cavity.

For the bluebirds, inhabiting a used cavity is better than having no cavity at all, especially when you consider that bluebirds have no ability to excavate their own nest cavity, and natural cavities are often in very short supply.

Back in the 1970s and 80s, with the birth of the environmental movement, individuals and organizations started to build wooden boxes designed to provide nesting cavities for bluebirds. After many different design attempts, several distinct nest box designs seem to work best for the bluebirds. This was the start to the recovery of Eastern Bluebirds all across the nation. 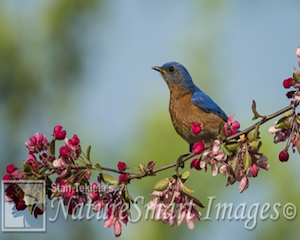 Now the Eastern Bluebird is doing so much better, thanks to thousands of individuals and dozens of organizations who build and maintain these nesting boxes. But I am afraid to say that the responsibility for the future of the bluebirds will continue to be in our hands. Unlike some species that also suffered at the hands of man but were able to recover, such as the Bald Eagle or Common Loon, the bluebird will perhaps always need the helping hand of man to survive. They will always need someone to design, build, and provide nesting boxes for their continued survival.

I have maintained a bluebird trail of more than 60 boxes for more than 20 years. I understand the importance of being a good landlord to these magnificent birds. I just hope that the young people of today will take up the challenge and carry it into the future. This spring, let’s teach our children to carry on the tradition of providing for our bluebird friends. Until next time…