Today, Teresa Marronne and Walt Sturgeon share with us some fascinating facts about the colorful Chicken Mushroom. 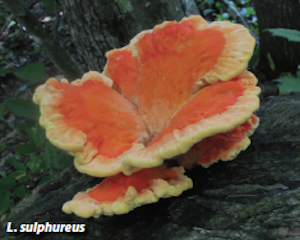 Unlike other edible mushrooms that seem to use natural camouflage to hide from the eager forager, the Chicken Mushroom (Laetiporus) announces its presence loudly. Its bright colors, large size, and frequently elevated location make it easy to spot from a fair distance.

The mushrooms are found in association with live, dead, or dying trees. The appearance of Chicken Mushrooms on a living tree is a signal that the tree has been attacked by the mushroom’s parasitic mycelium (thread-like fungal roots), which can sometimes be seen as whitish fibers in cracks in the wood. The fungus causes heart rot of the host tree.

Three different species are found in our area. All grow as a grouping of thick, stemless, fan-shaped caps; individual caps may be up to 12 inches wide but are generally smaller. Caps are some shade of orange to yellow-orange, with a fair amount of variation among different groupings of the same species. They are smooth to wrinkled and may be leathery but are not hairy. Edges may be rounded or scalloped and range from flat to wavy. The underside of each cap is covered with tiny pores. 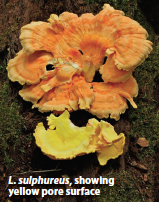 Chicken Mushrooms also go by the name of  Chicken of the Woods and Sulfur Shelf. They are in season late spring through fall.

For more information on Chicken Mushrooms and hundreds of the most common species found in the Northeast, check out Mushrooms of the Northeast: A Simple Guide to Common Mushrooms by Teresa Marronne and Walt Sturgeon.