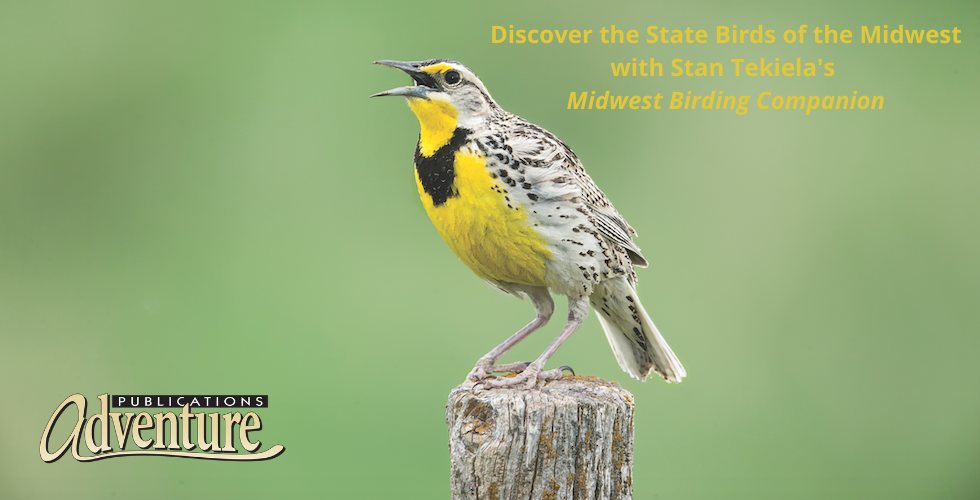 Do you Know the State Birds of the Midwest?

State symbols are important, they tell a story, and today we want to introduce the state birds of the Midwest. Some states share the same state birds, such as Illinois, Indiana, Kentucky, and Ohio, who favor the Northern Cardinal.

A familiar backyard bird, the Northern Cardinal (Cardinalis cardinalis) is seen in a variety of habitats, including parks. Usually it likes thick vegetation. It is one of the few species in which both females and males sing, and they can be heard all year. Listen for its “whata-cheer-cheer-cheer” territorial call in the spring. The male Northern Cardinal feeds females during courtship. The male also feeds the young of the first brood while the female builds a second nest. They are very territorial in the spring and fight their own reflection in a window or other reflective surface. In the winter they are non-territorial and gather in small flocks of up to 20 birds. Cardinalis denotes importance, as represented by the red priestly garments of Catholic cardinals.

The two Dakotas each have their own state bird, but North Dakota, Kansas, and Nebraska both adopted the Western Meadowlark as their state bird. The bird is named “Meadowlark” because it’s a bird of meadows and sings like the larks of Europe. It is best known for its wonderful song, a flute-like, clear whistle. However, the Western Meadowlark is not part of the the lark family. It is a blackbird family member and is related to grackles and orioles. Like other members of the blackbird family, the meadowlark catches prey by poking its long, thin bill in places such as holes in the ground or tufts of grass, where insects are hiding.

The American Robin is the state bird of Michigan and Wisconsin. Although complete migrators in northern states, the robin is a year-round resident in much of the Midwest. It can be heard singing all night long in the spring. City robins sing louder than country robins, in order to hear one another over traffic and noise. A robin isn’t listening for worms when it turns its head to one side. It is focusing its sight out of one eye to look for dirt moving, which is caused by worms moving. Robins are territorial and are often fighting their reflections in a window.

The American Goldfinch, a common backyard resident, is the state bird of Iowa. It is most often found in open fields, scrubby areas, and woodlands. Goldfinches enjoy Nyjer seed in feeders and line their nests with the silky down from wild thistle. Goldfinches almost always gather in small flocks. They twitter while they fly, and their flight is roller-coaster-like. The Goldfinch is often called a Wild Canary due to the male’s canary-colored plumage. The male sings a pleasant, high-pitched song. They move only far enough south to find food.

Minnesota chose the Common Loon for its state bird. The Common Loon hunts for fish by eyesight and prefers clear, clean lakes. It is a great swimmer, but its legs are set so far back that it has a hard time walking. “Loon” comes from the Scandinavian term lom, meaning “lame,” for the awkward way it walks on land. To take off, it faces into the wind and runs on the water while flapping. Its wailing call suggests wild laughter, which led to the phrase “crazy as a loon, but also gives soft hoots.” In the water, Loon young ride on the backs of their parents for about 10 days. Adults perform distraction displays to protect the young. They are very sensitive to disturbance during nesting and will abandon the nest.

The Eastern Bluebird is the state bird of Missouri. This summer resident of open fields and agricultural areas gathers in large family groups for migration. Once nearly eliminated from the Midwest due to a lack of nest cavities, bluebirds now thrive thanks to people who have installed thousands of nest boxes. Bluebirds prefers open habitats, such as farm fields, pastures, and roadsides, but they also like forest edges, parks, and yards. The bluebird is easily tamed. It often perches on trees or fenceposts and drops to the ground to grab bugs, especially grasshoppers. Its song is a distinctive “churlee chur chur-lee.” The rust-red breast is like that of the American Robin, its cousin.

The beautiful Ring-necked Pheasant is the state bird of South Dakota. It was originally introduced to North America from China in the late 1800s. It is common now throughout the US, and like many other game birds, its numbers vary greatly, making it common in some years, scarce in others.

Ring-necked pheasants seek shelter during harsh winter weather. To attract females, the male gives a cackling call and then rapidly flutters his wings. They take off in an explosive flight with fast wingbeats, followed by gliding low to the ground. The name “Ring-necked” refers to the white ring around the male’s neck. “Pheasant” comes from the Greek word phaisianos, which means “bird of the River Phasis” (known today as the Rioni River).

Learn more about all the birds of the Midwest with Stan Tekiela’s Midwest Birding Companion.