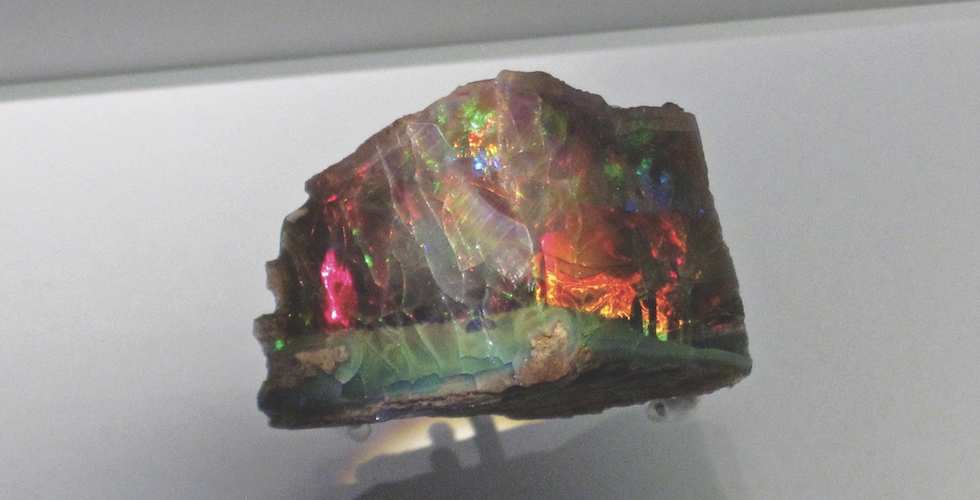 Many southwest states have state gems, minerals, rocks, or fossils, but you may not have heard or know about all of them. Still, state gems are almost always selected for their long history in the state and for their beauty. Many were selected because school classes petitioned the state legislatures to select a particular gem. Best of all, many of these state gems are easy to collect!

Note on Collecting Gems: Before you go out collecting, make sure that collecting is allowed where you’re looking. (Do not go onto private property when collecting, as that’s illegal.) In many cases, state parks and public-owned land have sites where you can legally collect gems, though it might take some homework first.

Turquoise is the state gem of Arizona and New Mexico. It is a semiprecious gemstone used in rings, earrings, necklaces, bracelets, beads, and works of art. The Southwest Native Americans valued the blue-green mineral greatly and have mined it for more than 2,000 years to use in ornaments and ceremonies. Turquoise is a combination of copper and aluminum phosphate found in shallow mines near copper deposits. It varies in hardness from gem quality, with a Mohs hardness near 6, to soft and chalky, which must be stabilized with polymer adhesives if used in jewelry.

The precious Virgin Valley Black Fire Opal is the state gem of Nevada. Opals form when water seeps through rocks and dissolves the mineral silica. When the water evaporates, the silica deposits harden; opals are famous for reflecting various colors of light. Want to dig for your own high-quality opals? The Royal Peacock Opal Mine and several other sites in the Sheldon National Wildlife Refuge near Denio are open for public mining several times during the year. Most opals have fractures and must be stabilized with polymer adhesives if used in jewelry. Nevada also has an official semiprecious gemstone: Turquoise—see the Arizona and New Mexico description above.

In Oklahoma the Hourglass Selenite holds the honor of state gem. This form of transparent gypsum crystal comes from salt deposits made by ancient seas in central Oklahoma. Sand and clay particles inside the crystal often form an hourglass shape. Gypsum is soft enough that you can scratch it with your fingernail, giving it a score of 2 out of 10 on the Mohs Hardness Scale. You can dig for these crystals at the Salt Plains National Wildlife Refuge.

The famous Blue Topaz in its Lone Star Cut form is the state gem of Texas. The colors and hues of topaz vary from yellow, amber, brown, green, blue, red, and pink to transparent. Its beauty and hardness of 8 on the Mohs Hardness Scale make it popular for jewelry. Intense blue topaz is found only in streambeds in Mason County in Central Texas, where several ranches offer topaz hunting.

The Brown-colored Topaz formed in cavities in volcanic rock from eruptions 7 million years ago is the state gem of Utah. Exposure to sunlight makes the gem colorless and transparent. Topaz can be found in washes in the mountains of western Utah. You can search for topaz crystals, usually about 1 inch long with a Mohr hardness scale of 8, on public lands around Topaz Mountain in Juab County.

Backyard Science & Discovery Workbook: Southwest is part of a series of seven region-specific workbooks, including California by George Miller, Northeast by Susan Schenck, Pacific Northwest by Robert Niese, Rocky Mountains by George Miller, South by Erika Zambello, and Midwest by Brett Ortler. The books are complimented by the Insects & Bugs Backyard Workbook by Jaret C. Daniels and the Rocks & Minerals Backyard Workbook by Dan R. Lynch.

If you enjoyed this post, order your copy of Backyard Discovery & Science Workbook: Southwest here, and sign up for our newsletter now!