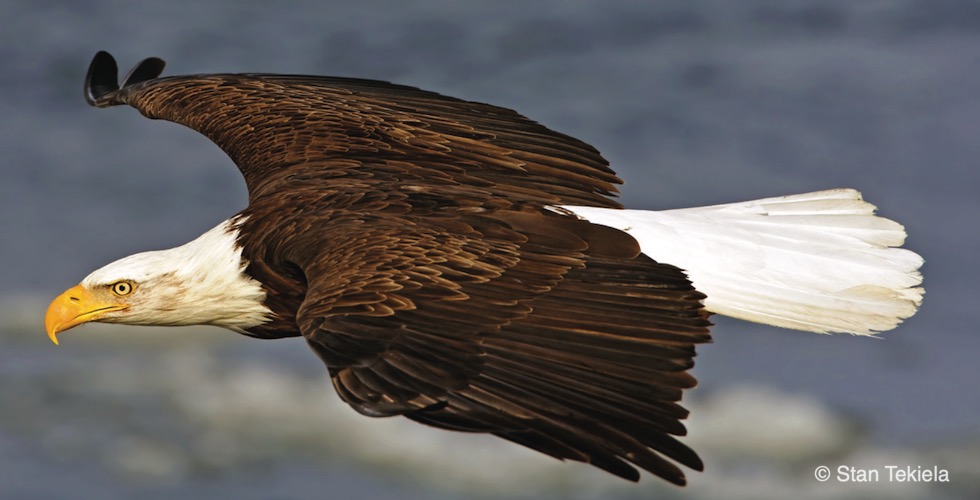 A Look at the Majesty of the Bald Eagle

In his new book, Bald Eagles: The Ultimate Raptors, Stan Tekiela documents the majesty of these great birds. Today we take a look at the Bald Eagle throughout history.

If you’ve ever seen an eagle fly gracefully over an unbroken forest or watched it snatch a fish from the surface of a crystal-clear lake, you have probably experienced the same inspirational feeling that has touched people throughout the ages.

From ancient days to current times, the eagle has been greatly admired. It has also played an important role in the history of many cultures.

A Symbol Through the Ages

Greek and Roman legends claim that only the eagle had enough speed of flight and strength in its talons to snatch thunderbolts away from their god kings (Zeus and Jupiter, respectively). With stories like these adding to its image, the eagle became synonymous with power, skill, and cunning in many cultures.

An eagle was used in ancient Egypt to symbolize the goddess Nekhbet, who was the eagle deity. She was considered the protector of the Pharaoh by spreading her wings.

The eagle that influenced the history of these nations, however, was not the Bald Eagle. Ancient cultures and Europeans were familiar only with the Golden Eagle and several other eagle species found throughout the world. Unknown to Asia, Africa, Europe, and the rest of the Old World, the Bald Eagle is native solely to North America.

It’s no surprise that, in the past, American Indians had seen the beauty of the Bald Eagle and chosen it for their symbol, often carving its image into totems. Many tribes adopted it as a symbol of honor, achievement, leadership, and bravery.

Comanche Indians tell a creation story about a chief’s young son who died. After the father offered prayers, the boy came back to life as a large and powerful bird—the first eagle. The Comanche eagle dance celebrates this colorful legend.

In other American Indian cultures, the Bald Eagle serves as an intermediary between the Creator and the people. Pawnee Indians saw the Bald Eagle as a symbol of fertility because eaglets, in their large nests high off the ground, were safe and well protected from intruders and were thriving.

The Eagle in US History

We have our own modern history with the Bald Eagle. The United States first adopted the Bald Eagle as its national symbol in 1782, depicting it on the Great Seal of America.