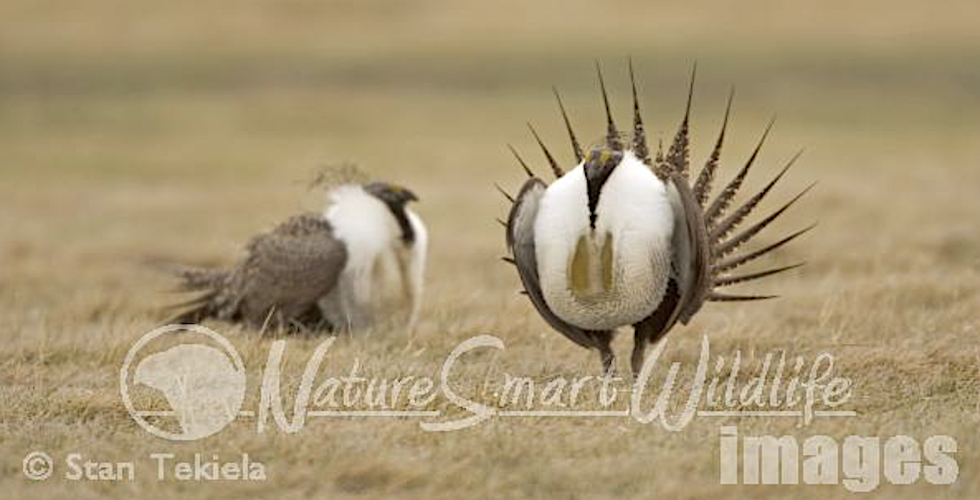 Stan Tekiela recently spent three mornings studying the behaviors of the Greater Sage Grouse. He shares with us what he learned about these amazing birds.

I am no stranger to getting up predawn, stumbling around in the dark, and searching out remote locations that I have never been to before. So it was “just another day at the office” when I recently went to Wyoming and Colorado to visit an old friend, the Greater Sage Grouse (Centrocercus urophasianus).

Sage Grouse are large and unique birds whose entire lives are directly connected to the sagebrush habitat of the American West. They are found in only 11 Western states, from North Dakota to California. They inhabit the sagebrush areas of the high desert. Often, they are found at 8,000-9,000 feet in elevation. The habitat is dominated by sagebrush, which is a woody plant with small gray-green leaves that remain on the plant all year. These plants can live for upwards of 150 years and are the main food source for the Sage Grouse.

Each spring, male Sage Grouse gather in small open areas that are free of sagebrush. The openings are created by salty sediments in the soils that inhibit the growth of the sage plant. Originally there were approximately 500,000 square miles of sagebrush across the Western states. Today, less than half of this unique habitat exists, putting a squeeze on the population of the Greater Sage Grouse.

Each March and April, when the last vestiges of winter are giving way to warmer spring weather, the male Sage Grouse travels from miles around to gather in groups to show off for females. At this time of year, the male is in peak physical shape, having put on weight over winter. Testosterone surges in the male grouse’s body, which causes his large neck pouches to swell. These pouches can hold up to a gallon of air and are critical in the males’ displaying. The male birds also become aggressive towards other males. Each male can have up to a dozen or more fights with neighboring males per day. Males fan their spiky tail feathers and strut about, making a lot of swishing and popping noises.

The dancing grounds, where the males display for the females, is called a lek. The lek is often just a couple of acres in size. These areas are traditional and have been used continuously for upwards of 100 years. This is the place where females can find the males for mating each spring.

Upwards of 50 or 60 males gather on the lek to display for the females. Each male has fought for a specific spot on the lek. The older, more dominant males presumably get the best spots. The females come from miles around to observe and assess the males. Just what the females are looking for in the male is not clear. To us, all the males look exactly the same. Their feathers appear the same, their dancing appears to be the same, and their calling is identical. But the hens zero in on the best males.

About three-quarters of all the females that visit the lek will mate with just one or two of the males. The females often gather around the dominant males and watch them closely. At some point a female will solicit a copulation from the male by drooping her wings and lying flat, chest down, right in front of him. Copulation takes only one or two seconds.

After mating, the female wanders off, up to 10 miles away from the lek, to build a nest and start laying eggs. She will lay 6-8 eggs in a shallow depression under the cover of sagebrush. Around 50% of all Sage Grouse nests are predated. If this happens early in the season, then the female can return to
the lek, where the males continue to dance and fight, even without the presence of females. She can try a second time. But if the predation occurs later in the nesting cycle, then she will have to wait and try again the next year.

Sage Grouse only live for 4 or 5 years, so each nesting season is critically important. Usually females only get one or two chances to mate in their lifetimes. Populations of this bird have dropped dramatically over the past 100 years; in fact,
in 2015 the Sage Grouse was considered for listing as an endangered species.

I spent three amazing mornings studying the behaviors of these remarkable birds. I was also fortunate enough to capture some incredible images and video detailing their mating behavior.