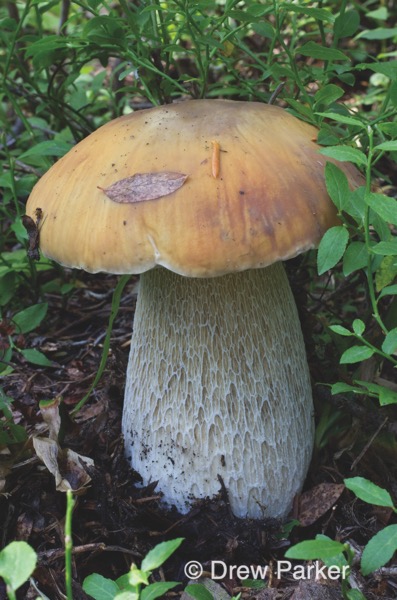 As the name King Bolete suggests, Boletus edulis is one of the most sought-after wild mushrooms. This is the mushroom that Europeans call the Porcini or Cep—and many experts believe that the true European Boletus edulis is not found in North America. Instead, there are most likely many different species across the country that many people simply refer to as Boletus edulis due to their similarities and popularity as a good edible.

From above, this brown-capped mushroom looks like a typical cap-with-stem shape, but turning it over reveals a spongy pore surface. This is composed of a series of tubes that hold the spores. It is the feature that most strongly defines the group of mushrooms called, in general, Boletes, a term used to refer to many cap-and-stem mushrooms with pores.

The King Bolete mushroom grows from the soil, singly or in loose groups, in association with trees; they are generally found under conifers but may appear under hardwoods including birch.

This large, stout mushroom has a fleshy, yellowish-brown to reddish-brown cap, anywhere from 3 to 10 inches wide; caps are smooth to slightly wrinkled, and the edges are usually paler. Caps are dry, becoming slightly sticky in wet weather. Immature caps are rounded and may seem small in relation to the swollen stem, which tends to be short and bulbous on young specimens. Stems lengthen with age and may be up to 7 inches tall and 1 to 3 inches thick; they become more slender with age but often remain bulbous at the base.

Young, fresh specimens have stems that are white or cream-colored, and typically brownish at the top; the entire stem may turn somewhat brownish with age. Stems are adorned with surface reticulation (mesh-like texture) that is dull white on young specimens, often darkening slightly with age. The reticulation is always present at the top of the stem and may cover most or all of the stem. There is no ring. The interior of the stem is solid and white; although it is a little firmer than the cap, the stem is valued just as much for edibility. The pore surface is white and very finely textured when young; the pores are stuffed, making the surface appear nearly solid. With age, the pores turn dingy yellowish, olive-yellow, or brown. The interior flesh of the cap is white, with a firm texture. When cut or damaged, the flesh of the cap and stem does not change color; bruised pores may darken slightly. (In comparison, the flesh and pore surfaces of many other Boletes stain or discolor very noticeably when cut, scraped, or bruised; some toxic varieties turn blue when bruised.) 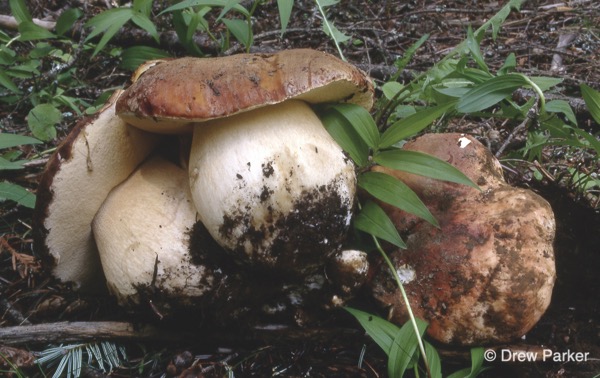 The King Bolete has an olive-brown spore print and can be found late spring through late fall, depending on elevation (and rainfall). 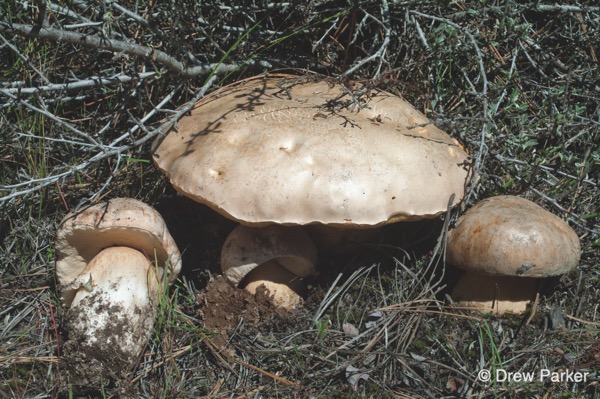 In their upcoming book Mushrooms of the Northwest: A Simple Guide to Common Mushrooms, Teresa Marrone and Drew Parker describe more than 400 species of common wild mushrooms found in the Northwest states of Idaho, Oregon, and Washington. Pre-order your copy now.