Discover the Amazing World of Hummingbirds with Stan Tekiela 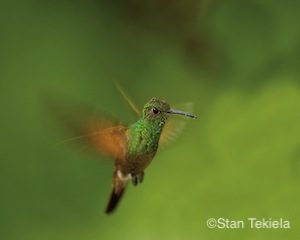 The hummingbird family, known as Trochilidae, includes more than 325 species. Compared with the other bird families, this one is huge! It is the second largest in size after the flycatcher family, which has around 400 species.

Hummingbirds are New World birds found only in North, Central, and South America. These tiny flying jewels were unknown to the scientific community until the Old World explorers arrived. The wide variety of hummers must have mystified the early ornithologists. Even today, the reasons for the large number of species are still not known.

None So Fair
North American hummingbirds are some of the most easily recognized birds, characterized by many unique features. These petite treasures are well known for their specialized, brightly colored, sparkly feathers, which refract sunlight almost like a prism. Unlike most other birds, hummers enjoy a distinctive diet of nectar liberally seasoned with minute insects. For sipping their sweet drinks, they sport a long, narrow bill that slips easily into flowers and nectar feeders. They are very fast, agile fliers and the only birds that truly hover in flight. Many birds can remain stationary, or hover, for a few wing beats if they have a good headwind, but they cannot sustain their hover like a hummingbird. Incredibly, hummers can also fly backward! They are the only birds that can fly straight up and down, fly side to side, and even flip around in an aerial somersault. The key to all of this fantastic flight is their size and weight. 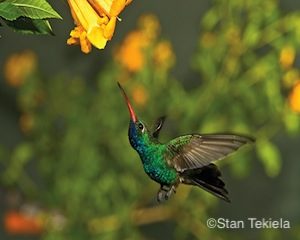 Some birds have misleading names. Red-bellied Woodpeckers, for example, don’t have a noticeable red belly. They have just a slight red blush that is easily missed unless you are near and viewing the bird from underneath. Few birds are as well named as the hummingbird. Just listen for the humming sound you’ll hear as they fly by and you will understand the reason for the distinctive name. The sound, however, is not made with the vocal chords. It’s actually created by the wings, which flap incredibly fast. Hummer wings move so much air so quickly that audible reverberation is produced.

The World’s Smallest Birds
All hummer species are extremely small. In fact, the smallest bird in the world is a hummingbird. The mini Bee Hummingbird, found in Cuba, is only 2 inches long and weighs 1.8 grams—about 6⁄100 ounce. The smallest hummer in the United States is the Calliope Hummingbird. It weighs just 2.5 grams, which is still miniscule at less than 1⁄10 ounce. The Calliope is noticeably smaller than the other hummingbirds and also has a very short bill. The weight range of a Rubythroated Hummingbird is slightly more at  2.7–3 grams, making it about the same weight as a U.S. penny! 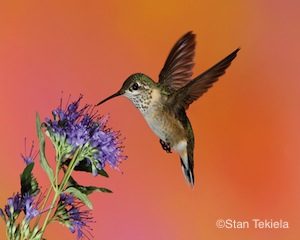 In future posts we will look at how you can attract these beautiful birds to your backyard and share some more amazing facts about hummingbirds.

Check out Stan Tekiela’s compelling photographs and descriptions of these enchanting birds in his book Amazing Hummingbirds: Unique Images and Characteristics.

About the author
Naturalist, wildlife photographer, and writer Stan Tekiela is the originator of the popular nature appreciation book series that includes loons, eagles, bluebirds, owls, hummingbirds, woodpeckers, wolves, bears, and deer. For about three decades, Stan has authored more than 130 field guides and wildlife audio CDs for nearly every state in the nation, presenting many species of birds, mammals, reptiles and amphibians, trees, wildflowers, and cacti. Holding a Bachelor of Science degree in Natural History from the University of Minnesota and as an active professional naturalist for more than 25 years, Stan studies and photographs wildlife throughout the United States and has received various national and regional awards for his books and photographs. Also a well-known columnist and radio personality, his syndicated column appears in more than 25 newspapers, and his wildlife programs are broadcast on a number of Midwest radio stations. Stan can be followed on Facebook and Twitter and contacted via his web page. For more stories about wildlife and nature, sign up for our newsletter now!