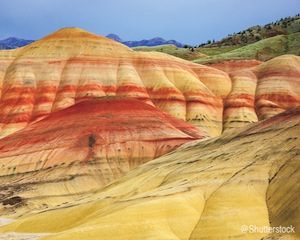 Jon Kramer, Julie Martinez, and Vernon Morris, authors of the book Dinosaur Destinations, explore the most exciting dinosaur and fossil sites near you. Today we take a look at the John Day Fossil Beds National Monument in Oregon.

John Day Fossil Beds National Monument is one of the greatest geological and paleontological preserves on Earth. Consisting of three separate land units, the fossil record here spans an incredible 41 million years, covering most of the Cenozoic Era, aka the “Age of Mammals.” So can you guess what kind of fossils you’ll find here? Well, they aren’t dinosaurs! Over millions of years, the area was home to all kinds of incredible mammals: from primitive rhinos and three-toed horses, to saber-toothed cats and huge short-faced bears. And those are just a start! The Monument is also home to the famous Painted Hills, which are aptly named. Long story short: A visit is well worth the trip, even if there aren’t any dinosaurs 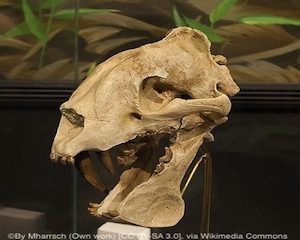 There are three separate units of this park, and while you’ll need to spend a few hours in the car for the round-trip, the scenery alone is worth it. Your first stop should be at the Thomas Condon Paleontology Center. Here, you’ll find displays of fossils from all three portions of the park. The center also features a working fossil lab that has a huge window, giving you the chance to watch scientists work on real fossils from the Monument. Even though the site has been the subject of dedicated research for more than a century, new discoveries continue to be made. If you want to see fossils up close and personal, you can take the “Trail of Fossils” at the Clarno unit. There, you can see fossils weathering out of the rock. But don’t touch because disturbing them is prohibited. 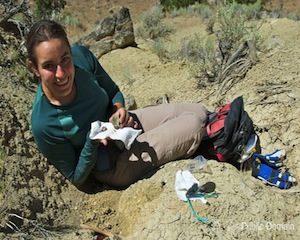 The John Day Fossil Beds National Monument consists of three units: Sheep Rock, Painted Hills, and Clarno. These three locations are dispersed through east-central Oregon. John Day Fossil Beds National Monument offers a number of educational programs for kids, many led by the Monument’s paleontology staff. The Sheep Rock Unit of the park operates a bookstore at the Thomas Condon Paleontology Center. For more information and to plan your visit check out the website.