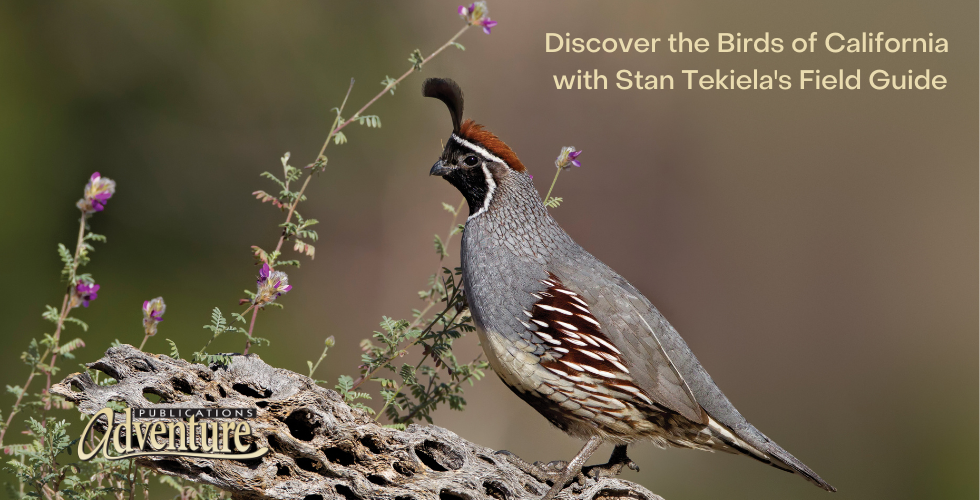 Discover the Birds of California with Stan Tekiela’s Field Guide

Millions of people have discovered bird-feeding. It’s a simple and enjoyable way to bring the beauty of birds closer to your home. Watching birds at your feeder often leads to a lifetime pursuit of bird identification. The Birds of California Field Guide by Stan Tekiela is for those who want to identify the common birds of California.

There are more than 1,100 bird species in North America. In California alone there have been over 510 different kinds of birds recorded throughout the years.

These bird sightings have been documented by hundreds of bird-watchers and have become a part of the official state record. From these valuable records, Stan Tekiela has chosen 177 of the most common birds of California to include in this field guide.

Bird-watching, or birding, is one of the most popular activities in America. Its appeal in California is due, in part, to an unusually rich and abundant birdlife.

Open space is not the only reason there is such an abundance of birds. It’s also the diversity of habitat. California can be broken into four distinctive habitats—the Pacific Border Province, Sierra-Cascade Province, Basin and Range Province, and Lower California Province—each of which supports different groups of birds.

The coast is a great place to see many gull species such as California Gull or Heermann’s Gull. California also has over 2,675 square miles (6,950 sq. km) of freshwater surface. The Sacramento and San Joaquin Rivers are the largest, and several drain the entire state. There are also several thousand small lakes. Salton Sea and Lake Tahoe are the largest and are home to birds such as American Avocets and American White Pelicans. It’s always worth the time to investigate bodies of water in California for the presence of birds.

Varying habitats in California also mean variations in weather. California has the highest and lowest elevations in the lower 48 states, rising from 282 feet (86 m) below sea level in Death Valley to 14,494 feet (4,419 m) at Mount Whitney. Northern parts of California are cooler and wetter than southern California. The Mojave Desert is the hottest region in California and in the US in the summer, while winters in the mountains are cold and snowy with many snowcapped peaks year-round.

No matter if you’re in the hot, arid deserts or in the cool, moist mountains of California, there are birds to watch in each season. Whether witnessing hawks migrating in autumn or welcoming back hummingbirds in spring, there is variety and excitement in birding in the Golden State.

Order your copy of Birds of California now. For more stories about wildlife and nature, sign up for our newsletter here!