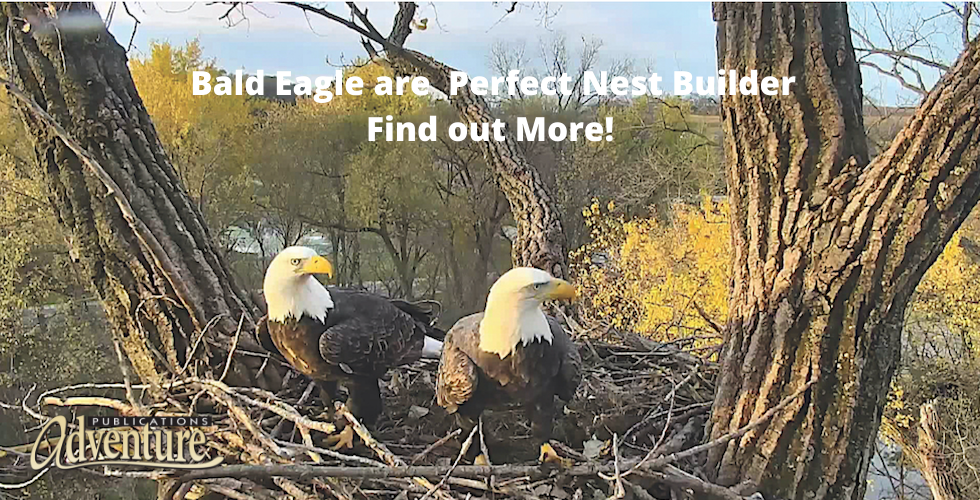 In his new book Bald Eagles: The Ultimate Raptors, Stan Tekiela documents the majesty of these great birds. Today we take a look at the Bald Eagle as the perfect nest builder.

The Bald Eagle is well known for its impressive large nest, known as an aerie (or eyrie). The nest site is usually high in a large tree and often near water, with an open flight line to and from the nest. Depending on the height of the tree, nests can be anywhere from 10 feet from the ground to as high as 100 feet.

Nesting begins with a search for the right tree. A pair of eagles chooses one with branches large enough to support a heavy nest, often a tall White Pine. Next, the birds carry in the building materials one by one—large sticks and twigs up to 3 inches in diameter and as long as 3–4 feet. Eagles collect these from the ground or, during flight, they break them off of dead trees. Branch breaking in flight is accomplished by a combination of movements—flying to a dead or dying tree; grabbing a branch or twig with the feet; and, with several deep, powerful wing beats, snapping the branch from the tree and flying away. Once a branch is taken to the nest, it is meticulously placed by one member of the pair.

The nest interior is lined with pine needles, grasses, and other soft plant materials. Evergreen sprigs are often brought in during this time—a common practice of many species of hawks and other eagles.

While eagles usually nest in large trees, they also build on cliffs. In far northern regions where trees are short or nonexistent, nests are constructed on the ground. In the Everglades at Florida’s southern tip, eagles build their nests in mangrove trees, which grow to just feet above the water line.

Bald Eagles are known to take over Osprey nests. These nests are often on power poles or other manmade structures, including bridges or even floating channel markers in large bodies of water.

A typical nest is usually around 5–6 feet in diameter and strong enough to support a human adult. Since nests are reused year after year, a pair simply adds new nesting material each season. As years pass, nests can grow to enormous sizes with the accumulation of additional branches. Some nests expand to 10 feet in diameter and reach 20 feet in height! Some of these extremely large nests are estimated to weigh over 2,000 pounds. If a large nest is in a dead or weak tree, eventually it will break apart in a storm. When the tree itself falls, the pair often rebuilds nearby.

Nest building can occur at anytime of year except during incubation. Often a pair will construct a nest in late summer or fall and add to it slowly over the winter, but these efforts are not intense. When spring comes, the eagles get serious about building and put much effort into gathering materials for the nest.

Sometimes a pair of eagles will use a nest for several years and then suddenly start a new one close by. The reason for this behavior is not yet understood.

Like most birds, Bald Eagles are territorial during nesting season and defend their territory by keeping other eagles away from the nest. Depending on the availability of food and density of the local eagle population, a typical territory is 1–2 square miles—larger when there is less food, smaller when there is a more consistent supply.

A relatively recent invention, nest cams are now a popular way for eagle fans to take a peek inside the nest. These cameras are often most popular during breeding season, when eggs and hatchlings are the stars of the show, giving birding aficionados, schoolkids, and regular web-browsers alike an up-close look at an eagle’s life.