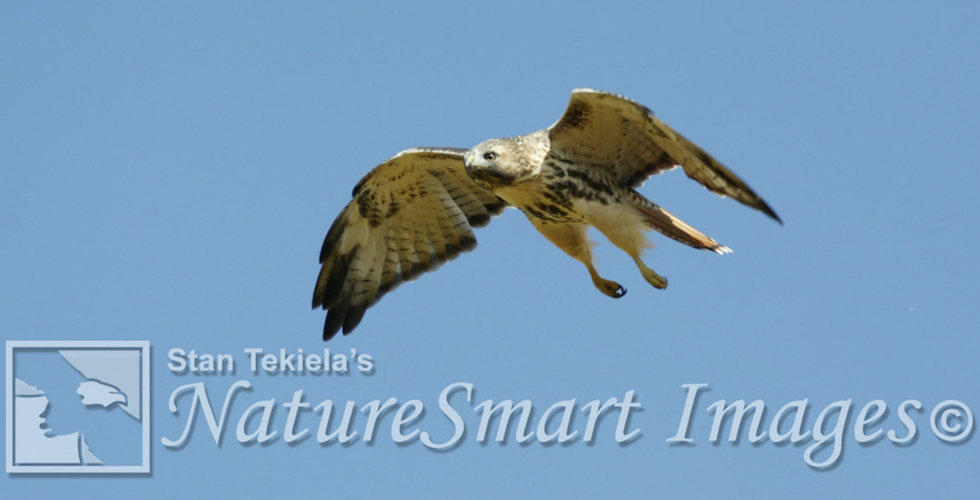 Naturalist and wildlife photographer par excellence Stan Tekiela shares with us his observations about red-tailed hawks.

Often it is the common critters that go unnoticed or at least unappreciated. After all, when was the last time you noticed a house sparrow or pigeon? How about an Eastern chipmunk or gray squirrel? I’ve always maintained that we see woodpeckers do incredibly amazing things, such as landing on vertical surfaces without slipping, nearly every day, but we don’t give it a second thought. It’s unbelievable that these woodpeckers fly up to a tree trunk and stick to it like Velcro. The woodpeckers act as if gravity doesn’t exist. All other birds are landing on horizontal branches.

Recently, while leading a birding trip to see migrating hawks in northern Minnesota, I got to thinking about all the red-tailed hawks we were seeing. This is one of those hawks that can be very common in both rural and urban environments and often goes unnoticed. I see red-tailed hawks sitting on highway light posts right in big cities and many more along highways in the country.

Red-tails are found breeding throughout most of North America, from Canada and Alaska all the way down to Panama and the West Indies. They are masters at adapting to different habitats. They are found from the mountains to the prairies, from the forests to the deserts. They also do well in edge habitats where forests meet prairies or mountains meet flatlands, and they nest in large cities such as New York City.

Sometimes called “Chickenhawks,” they actually don’t hunt chickens but rather concentrate mainly on small mammals such as mice, voles, and shrews. They will also hunt cottontail rabbits and ground squirrels. They hunt reptiles such as snakes and lizards and also chase down larger birds such as pigeons for their next meal. They are opportunistic and seasonal feeders, which means they will take advantage of any prey they find and follow whatever prey is seasonally abundant. They have been known to hunt and eat upwards of 500 different species. Small mammals make up 65% of their diet and birds make up 21%. Red-tails require about 7% to 10% of their body weight in food each day to survive, which works out to about three mice per day or the equivalent weight in prey.

Identifying red-tailed hawks can sometimes be challenging—not because you don’t see many of them, but rather because they can be highly variable in color. There are 14 recognized subspecies of the red-tailed hawk. Within these, there are three distinct color morphs or phases of red-tailed hawks: light morph, intermediate, and dark. The terminology is a little confusing here. When they are called morphs or phases it makes it sound like it’s a temporary condition or that they will change color. This is not correct. For example, a dark morph bird is born dark and will have dark feathers its entire life, and the light morph will stay light its entire life.

Red-tails are large hawks standing just over 2 feet tall. But for all their size, they only weigh between 1.5 and 3.5 pounds. Adult females are about 20% larger than males. This is a noticeable difference. In biology, when one sex is larger than the other it’s called sexual dimorphism. Wing spans range from 3.5 feet to 4.5 feet from wing tip to wing tip.

They use their big broad wings to fly and soar over open areas to hunt for prey. In many parts of the country red-tailed hawks will hunt for bats near sunset when the bats are emerging from sleeping all day. The hawks chase them down and snatch them right out of midair. Once a meal has been procured for the day, red-tails will just sit and hang out.

So, it was a real pleasure to see several red-tails during the birding trip to Minnesota’s north shore, along with other cool birds such as Northern goshawks and sharp-shinned hawks.