Naturalist and wildlife photographer par excellence, Stan Tekiela, talks about his latest trip to Alaska and his encounters with grizzly bears.

Every trip I take to Alaska is special. When it comes to wilderness and wildlife, Alaska is the real deal. This year’s trip was no exception. Moose are often what I spend my time searching for, but this year I concentrated on grizzly bears.

How the Grizzly Bear Got Its Name

We have three types of bears in North America: the black bear, brown bear, and polar bear. The grizzly bear is a subspecies of brown bear. They tend to be the smallest of the brown bears. The name “grizzly” doesn’t have a clear origin. It seems that originally it was spelled “grisley” and referred to the grey or silver tips of the hair. The more modern spelling “grisly” refers to it being “fear-inspiring” or “fearsome.” Of course, I think either interpretation equally describes this amazing bear. 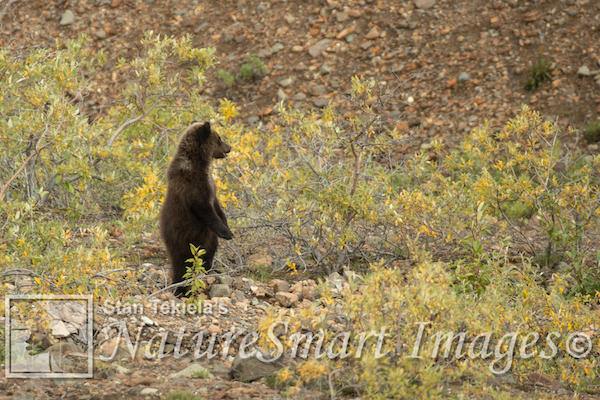 Over my 30-plus-year career studying wildlife, I have had many encounters with black, brown, and polar bears. I still find them endlessly fascinating and beautiful. They are one of my most favorite subjects to study and film.

This year, I had many wonderful opportunities to photograph grizzly bears in Alaska, mostly in and around Denali National Park. Most of the bears I encountered were females, which are called sows. All of them had at least one cub. Several had two cubs. Best of all, the cubs were “spring cubs” (born this past spring), so they were still very small and super cute.

Cubs of grizzly bears are born while the mother is still in the den during late winter, usually in February. So these cubs were just 6 months old. As a result, they were super curious and playful. They would follow their mothers anywhere and stick closely by their sides.

One day, while I was filming a mother and her single spring cub, the mother found a root of a tree sticking out of a dry riverbank. She started chewing and scraping at the gnarled root. For some reason, this activity scared the cub and sent it running away from its mother.

The cub wasn’t more than 30 yards away from its mother but couldn’t clearly see what she was doing. The mother continued to bite and then roll around on top of the root, depositing her scent and fur. The cub looked and acted confused, often running back a few yards and than standing up and trying to see what was going on.

I was able to capture some images before the mother walked up the dry riverbank and into the cub’s view. As soon as the cub saw its mother, it started running to catch up to her but suddenly caught a whiff of the scent post the mother had just laid down.

The cub approached the exposed and now torn-up root and suddenly starting doing exactly what the mother had been doing. The cub was now biting and rolling around on the root (which now was rather beaten up). As soon as the cub noticed the mother was still walking away, it quickly got up and ran after her.

The sow and cub started walking across the tundra straight towards me. Usually the bears will stop and feed for a while before moving on, but this mother clearly had some place to go. I was able to capture a number of images as the bears approached, but I needed to retreat before they came dangerously close. 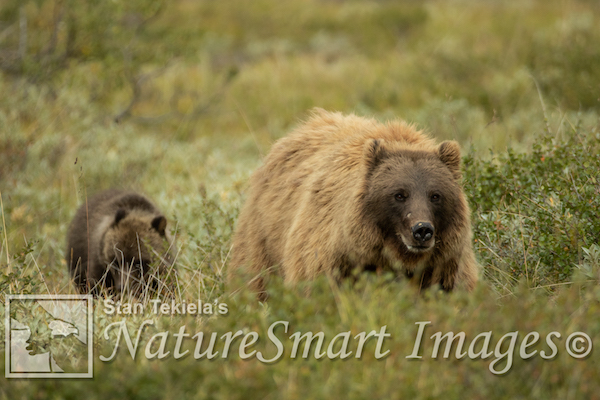 I must tell you that when you are all by yourself in the wilderness and you are looking through the long lens of a camera, it makes the bears look much closer than they actually are. It’s a bit unnerving!

Each and every time I have an encounter with a bear, I feel such respect towards these amazing animals. I can’t wait to return to Alaska.

If you enjoyed Stan’s post, you may consider one of his amazing nature books: Majestic Eagles; The Lives of Wolves, Coyotes, and Foxes; or Backyard Birds: Welcomed Guests at our Gardens and Feeders. Young readers will delight in his award-winning children’s books, such as Whose Butt?, Critter Litter, and Jump, Little Wood Ducks.