A Visit to the Split Rock Lighthouse 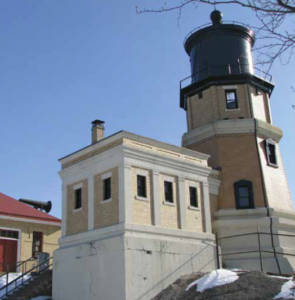 In todays post Kathryn and William Mayo, authors of 61 Gems on Highway 61, take us on a visit to the Split Rock Lighthouse and State Park.

Built in 1910 out of a need made apparent during the infamous and devastating Mataafa Storm of 1905, Split Rock Lighthouse State Park now draws hundreds of thousands of visitors from around the world. For a small fee you can take a guided tour right up to the top of the lighthouse and see the light that shines 20-some miles out to sea firsthand. It is now lit only on rare occasions, including every November 10, when it shines out as a beacon and as a memorial to the sailors who lost their lives on the Edmund Fitzgerald. To witness the lighting of this breathtakingly beautiful lighthouse is a moving and almost spiritual experience. Split Rock Lighthouse, because of its stark beauty and purposeful stance, is a favorite of calendar makers and has even been seen on Good Morning, America as a backdrop to American grandeur. It is Minnesota’s own Statue of Liberty; she is our maritime lady with a backbone. 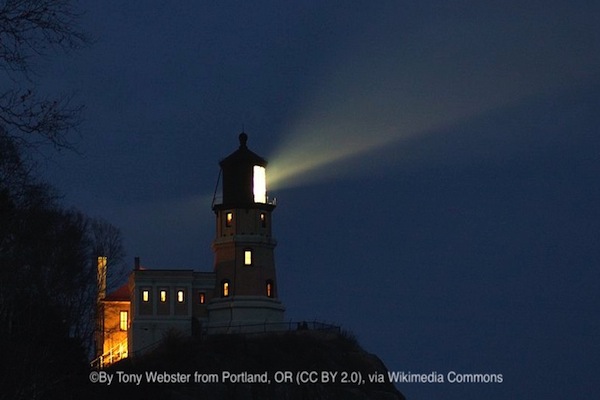 To see it is to know it and to love it. Better yet, you can’t take a bad picture of the mighty Split Rock Lighthouse, because day or night, sunset or moonrise, it strikes a proud profile. On canvas or in a photograph, the light dances upon the water and the cliff; this lighthouse is beautiful in any weather and in every medium. 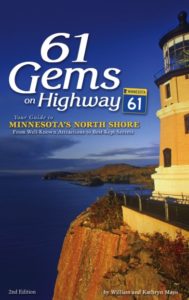 How to Get There
Split Rock Lighthouse is 20 miles from Two Harbors. Follow Highway 61 and turn right to enter the park, which is well marked with brown signs.

Accessibility
The Visitor Center and the Keeper’s House are wheelchair accessible, but the fog signal house and lighthouse are not.

About the authors: William Mayo is a former Duluth resident and has lived in Two Harbors, Minnesota, for the last 23 years. Long a part of the poetry scene of the North Shore and a former Artist-in-Residence for Isle Royale National Park, he has published work in National Geographic Traveler, Poets Who Haven’t Moved to St. Paul, and Zenith City Arts. He also holds an AAS Degree in Human Services and is an enrolled member of the Leech Lake Pillager Band. His love of the North Shore came early, while driving along old Highway 61 with his parents as a boy. Whether in a canoe, diving, or walking the beach, he is always awe-inspired by the eternal mystery of the Lake.

A Minnesota native and longtime visitor to the North Shore, Kathryn Mayo now resides within view of Lake Superior. Frequent trips “Up North” finally gave over to permanent residence, and Kate has drawn on her previous perspective as a visitor to the area in the compilation of these narratives. She spent most of her career in the role of counselor and is a licensed therapist and addictions counselor with an MA in counseling psychology.