Trumpeter Swans Are Back in the Wild

In today’s post, Stan Tekiela celebrates the return of Trumpeter Swans, who at one time were nearly wiped out in the lower 48 states. My-oh-my, how times have changed. Over the last 35-plus years, I have witnessed a few amazing changes in nature. It usually takes hundreds (if not thousands) of years to effect change. But when you throw in human activity, everything seems to be accelerated.

Recently, I have been spending a lot of time photographing a Trumpeter Swan nest with cygnets. When I first started studying, photographing, and writing about nature, there were no Trumpeter Swans around. They were locally extinct, a term called extirpated. We humans did a great job at eliminating so many species, including the Trumpeter Swans. The swans were wiped out of nearly all regions in the lower 48 states.

From the time of settlement until very recently, Trumpeter Swans were hunted for their meat and feathers. They are a large bird and fairly easy to shoot, and they provided hunters with a healthy meal. So these birds were targeted and were quickly killed off in much of the country before 1900.

The same thing happened to other species, such as the Eastern Turkey and Whooping Crane. Many more suffered the same fate, albeit for different reasons. Loons, Bald Eagles, Osprey, and others were nearly wiped out due to chemicals (DDT) in the environment and loss of habitat.

However, with the birth of the environmental movement in the 1970s, things started to turn around. Laws were passed to protect these birds. At the same time, reintroduction programs were launched, and many of these species have responded very quickly. 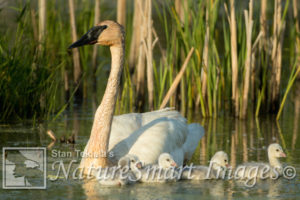 To restore the Trumpeter Swans, eggs were taken from a wild population of swans that still existed in Alaska and northern Canada. These eggs were hatched and the chicks raised to adulthood. The adults were kept to become the seed stock for future swans. Slowly, over many years, enough adult birds were available to be released into the wild. All of these re-introduced birds had large neck collars with identification numbers.

I recall very clearly leading a bird-watching photo tour in the early 1990s when I spotted my first Trumpeter Swan in the wild. Up until this point, it wasn’t possible to see them in the wild in the upper Midwest, so you can imagine just how excited my participants and I were to see this amazing bird.

Today, Trumpeter Swans are once again common in many parts of the country. I was photographing a pair of Trumpeter Swans with their cygnets the other day at a small park. A family with two young children and a dog were walking by and stopped to see what I was doing. Even though the pair of swans and six cygnets were about 100 feet away—and my camera was pointing right at the birds—the family didn’t see what I was photographing until I told them.

I am no longer stunned by this lack of observational skills, but what really amazed me is this: I mentioned to the family that, at one point in the not-so-distant past, these birds were extinct in this region and needed to be reintroduced. That means the occurrence of the swans nesting in this park is fairly noteworthy. However, the response I got from the family was that they had no idea and thought that the swans were always there.

I guess, on one hand, it is good that people think the swans are normal. But, on the other hand, if we don’t understand our past or have no knowledge of our history, it’s going to be a problem. You know what they say about history. If you don’t know or understand history, you are doomed to repeat it.