Fall is mushroom season; in today’s post, Stan Tekiela shares with us his knowledge about fungi. 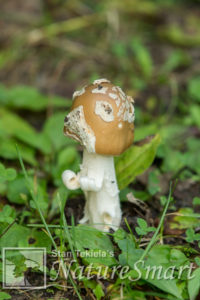 Late summer and early fall are the best times for mushrooms. For the past couple of weeks, I’ve been out and about searching high and low for all sorts of mushrooms. I find peace in the simple act of walking in the woods and being happy with whatever I find.

About 25 years ago, I wrote a book about how to find wild edible mushrooms. The book highlighted six common edible mushrooms that didn’t have poisonous look-alikes. I am updating this book now because there’s a renewed interest in the subject.

Finding and collecting edible mushrooms might seem like a daunting task, considering that there are an estimated 5.1 million different kinds of fungi in the world. Compare that to about 10,000 species of birds and only 5,000 species of mammals. With more than 5 million different kinds of fungi, no one can be an expert. There’s just too much information for any one person to know it all.

First, let’s discuss the purpose of the mushroom or, more technically, fungi. I like to make a comparison between an apple tree and fungi. The apple tree and the fungi are the living parts. The tree grows aboveground, while the fungi grows underground or inside a fallen log. When it comes time for the apple tree to reproduce, it grows apples with seeds inside. Each apple is a vehicle to transport the seeds (within) to another location to grow another tree. When a fungi wants to reproduce, it does so by sending up or sending out mushrooms. The mushroom contains all of the spores (not seeds) for the fungi to reproduce. The spores blow away on the wind to grow more fungi. So the mushroom is just like the apple, only you can’t see the tree part unless you dig it up.

Fungi are not plants. The cells that make up the two organisms are fundamentally different. Plants are made up primarily of cellulose, while fungi consist mostly of chitin (kī-tən). Chitin is also the primary component of the exoskeletons of insects and what your fingernails and hair are made of. It is more difficult to digest than cellulose.

Fungi play one of the most important roles in all our ecosystems. Fungi are found in terrestrial, marine, and freshwater environments all over the planet. It is estimated that fungi grow in every square inch of soil everywhere. Fungi spores have been found at heights several miles into the air. 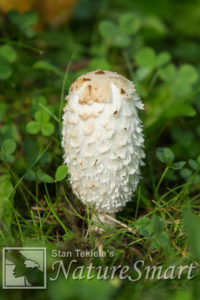 Fungi are on the front lines in the community of decomposers. Without fungi, every branch and tree that has fallen in the forest would still be lying on the ground. Fungi take the large, dead objects like tree trunks and start breaking them down to the point where bacteria and other organisms can take over. This is so important to recycle the nutrients locked up in the trees and return the nutrients back to the soil, thus making them available for new trees.

Finding edible mushrooms and avoiding the deadly ones is the real trick. I was reminded of this a couple of days ago when photographing an edible Shaggy Mane (Coprinus comatus) mushroom on a grassy trail. Just 6 feet away was a deadly Amanita mushroom that looked ridiculously similar. If you aren’t paying full attention, you might easily think they are both the edible Shaggy and pick the deadly Amanita. The results would be disastrous.

By the way, everyone who has ever eaten a deadly mushroom reported that they tasted great. Unlike what you see in the movies and TV, when you eat a deadly mushroom you don’t suddenly drop over dead. In fact, it is a long, drawn-out process of many days and weeks. The first symptoms don’t show up until 48 to 72 hours (2 to 3 days) after you eat the mushroom. This is because most of the toxins will kill your liver, and the first symptoms occur when your liver starts to fail.

The only treatment for this is a liver transplant—something I would not recommend. So, enjoy the mushrooms, but keep in mind the old saying: