In this week’s post, Stan Tekiela tells us about the time he got the chance to photograph a star-nosed mole.

Over the past 30 years I’ve had many chances to study and photograph all sorts of critters, from tiny shrews to massive moose. But there are a few critters that I still haven’t had a chance to photograph and get to know. While out for a walk with a friend on a wintry day, we happened upon one of those critters that I’ve always wanted to study up close—a star-nosed mole (Condylura cristata). 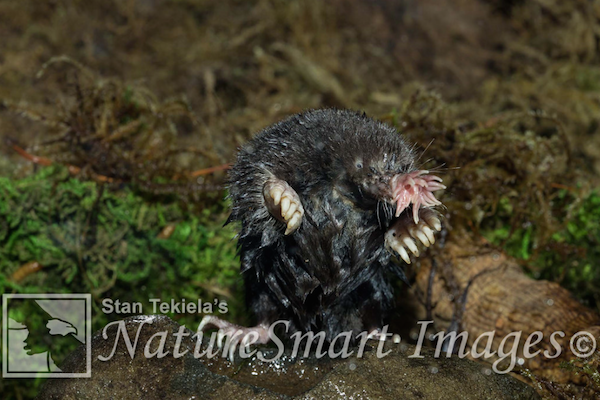 The star-nosed mole has to be one of the more strange-looking creatures. If you ever see one of these hamster-size moles, you won’t forget it. One is easily identified by its large, pink, fleshy nose ringed by a “star” of 22 short appendages, each called a ray, emanating from around the snout. It looks like it has an octopus on its face. The nose appendages form a large touch/sensory organ with more than 25,000 to 30,000 sensory receptors (known as Eimer’s organs) scattered throughout. By comparison, the average human hand has about 17,000 touch receptors. It is thought that the rays can touch as many as 12 objects per second and figure out what each object is by sending messages back and forth to the brain.

These creatures usually live in low, wet habitats along the east coast of the U.S., stretching westward and reaching around the Great Lakes region. They spend 99 percent of life underground, so they are rarely seen. Unlike other moles that prefer dry soils, the star-nose prefers moist soils and shallow ponds. Surprisingly, they spend a lot of time swimming and diving underwater in search of food, even under the ice in winter.

They have a fairly long (about 2 inches), sparsely haired tail. During winter they store extra fat in the tail, making it look plump. The body is covered in short, dense waterproof fur. This helps the mole to keep warm when diving in icy cold water or tunneling through the snow.

They have tiny little eyes. Sometimes, if the fur is in the right place, you can’t even see their eyes. Because they live underground, it is generally accepted that they don’t see like we do. Their vision is more geared towards seeing light and dark only. In fact, researchers believe the sensory information from the rays on the nose gives the mole a “visual” map of what it has encountered. At least half of the mole’s brain is devoted to processing sensory information sent from the appendages of the nose alone. 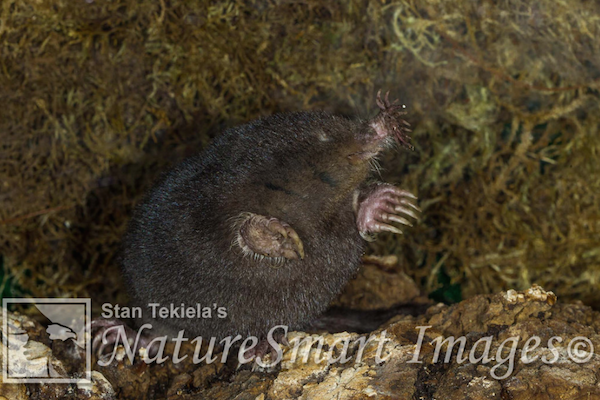 I found the mole’s front feet visually amazing. Huge, paddle-shaped feet angle outward like tiny shovels. Each front paw has five toes and five very long nails. The nails are used for digging through root-choked dirt and for swimming underwater. But look closer and you can see many small angled digging spades along each toe and sometimes on the palms. I’ve seen this kind of spade on the foot of the Spade-foot toad. The spades do a remarkable job at helping to dig in dirt.

The moles have specialized stiff hairs, a lot like whiskers, along the outer edge of each paw to help them feel where they are digging because they can’t see in the darkness underground. The paws are connected to tiny but remarkably powerful arms that give them amazing leverage and strength when digging. Don’t worry—the star-nosed moles are not digging tunnels and leaving piles of dirt in your yard. Those are the eastern moles and are completely different. Rarely do you see any evidence of the star-nose mole, especially because their habitat is usually too wet for most yards.

I am often reminded about how diverse nature is and how such a tiny animal can be so specialized and wonderful. I feel truly lucky to have finally had a chance to study this amazing creature.