In this week’s column, Stan Tekiela talks about his visit to the Californian coastal redwoods. 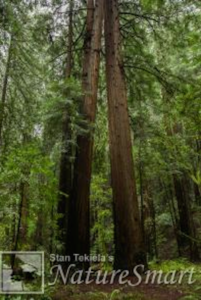 California is known for many things—sunny beaches, Hollywood, Disneyland, its designation as the Garlic capital of the world—well, maybe not so much for this last one, but you know what I mean. However for me, California has some of the most beautiful places on Earth and some of the most amazing wildlife. I am always on the lookout for the unusual or the underdog or the cool thing that isn’t so flashy. So I headed for the Coastal Redwoods (Sequoia sempervirens)—the tallest trees in the world!

On my recent trip to California, I took a day out of my wildlife photography schedule to visit a stand of old growth Coastal Redwoods. You really need to stand at the base of one of these magnificent trees to really understand their grandeur.

The Coastal Redwoods grow along a narrow band of the coast for about 450 miles from the northern border of California down to just south of San Francisco. The trees are restricted to what is called the fog belt, which is a strip of the coast extending inland about 25 miles where dense fog forms from the clash of the ocean water temperature and the warm air above it. The fog bathes the landscape and the giant trees for a good part of the year. The water in the fog condensates on the surface of the leaves and drips off to keep the soil moist, allowing these drought-sensitive trees to survive.

Known to be one of the oldest living trees, many reach 1,000 to 1,200 years with no trouble. Some have been aged at more than 2,000 years. The maximum record was approximately 2,200 years. During this long life, they produce wood at one of the highest rates of all trees. A study in 1995 figured that redwoods produce about 1,400 metric tons of wood per acre. The wood is strong and decay-resistant, making it desirable for all sorts of projects, such as outdoor furniture, fencing, and roofing shakes.

Because of their desirable wood, Redwoods were nearly wiped out from overharvesting. Precious few coastal valleys are home to Redwood trees today. Fortunately, most are now protected and preserved for future generations to see and admire. 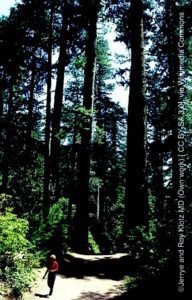 Even though they are giant trees, Redwoods produce amazingly small cones. Each January, the trees produce tiny pollen-bearing male cones and even smaller seed-bearing female cones. Each tree produces thousands and thousands of these minute cones. The wind carries off the vast numbers of the seeds, and most don’t germinate. Redwoods also clone themselves by underground roots. If the mother tree dies, tiny nodes located on the roots will sprout around the base of the dead parent tree. When this happens, it is called a fairy-ring. The new trees will quickly grow and take the place of the parent tree. New trees can grow over 6 feet in one year if moisture and light are suitable.

Coastal Redwoods should not be confused with the Giant Sequoia (Sequoiadendron giganteum), which is a similar tree but grows only in the Sierra Nevada mountains, mostly within the Sequoia National Monument and in a handful of other national parks. All of these locations are well away from the coast. The Giant Sequoia are just as massive and grow just as old but are able to withstand freezing temperatures, unlike the Coastal Redwoods.

My visit to these sentinels of the forest left me awestruck. Standing beneath the canopy of these giants really puts your own size and short life into proper prospective. To think of what these massive trees have seen over their 1,000-plus-year life span can set you back on your heels in total wonderment.

Walking among the trunks of trees that are wider than my truck, camera in hand, I didn’t realize until afterwards that I barely took a picture. I was so enjoying the splendor of the ancient trees that I took only a handful of images. Thinking back on it, I am glad that I had concentrated on the experience of the trees and not my usual world of capturing the beauty with my camera. Until next time…