Jon Kramer, Julie Martinez, and Vernon Morris, authors of Dinosaur Destinations, explore the most exciting dinosaur and fossil sites near you. Today, we take a look at Waco Mammoth National Monument, a famous enclosed bone bed of mammoths located in Waco, Texas. 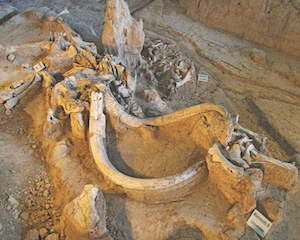 On a fine spring day in 1978, Paul Barron and Eddie Bufkin embarked on a search for arrowheads and fossils near the Bosque River. They soon stumbled upon something else altogether: a very large bone eroding out of a ravine. They took the bone to the Strecker Museum at nearby Baylor University, where it was examined and identified as the femur of a Columbian mammoth (Mammuthus columbi). The museum organized a team to search for more bones, and digging soon began. This paleontology party hasn’t stopped; since then, scientists have found 19 mammoths. Today, the dig site is now enclosed and climate controlled, and it was recently named a National Monument.

When you stare down from the elevated walkway at all the bones below, you may ask yourself, “How did this happen?” It’s a bit different than the Mammoth Site in South Dakota (page 146). There was no big hole in the ground filled with spring water that attracted mammoths, which got stuck in the pit and then died. Instead, research indicates these animals were caught in a very sudden geologic event—like a flood or landslide—and were quickly buried in the process. 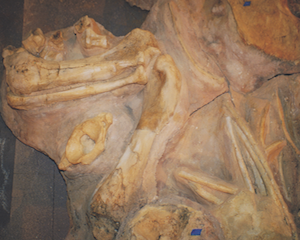 Every size and age of mammoths are jammed together: Mothers, fathers, and youngsters were overwhelmed and suddenly entombed in the sediments. Most of the bones found at this site are preserved in situ (left in place in the ground, just as they were found), and research on them continues. The walkway gives you a bird’s-eye view of the whole scene. By the way, mammoths are not the only fossils found here; there are also camels (yes, camels!) and saber-toothed cats.

The National Monument offers special educational classes for kids, including “Fossil Fun,” a $3 add-on program where you can sort through fossil-rich gravel and keep what you find. There’s no gift shop on site, but the Monument is located in Waco, a thriving city of more than 130,000 people, so shopping opportunities abound.