In this week’s column, Stan Tekiela talks to us about the Great Crested Flycatcher, a very common but not commonly seen bird. 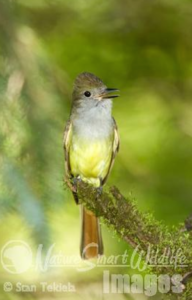 There are a few birds that are very common but not commonly seen. In other words, these birds are found in good numbers all across our region, but you just don’t see them. One good example of this is the Great Crested Flycatcher (Myiarchus crinitus). It is not a secretive bird; in fact, it’s bold enough to sound off with a very loud and distinctive call that echoes throughout the forest, announcing its presence.

Starting in late spring and throughout the summer months, you can easily hear the distinctive “weeping” whistles high up in the treetops. Most birds will stop calling while nesting so they don’t attract attention to their nests, eggs, or young. But this is not true of the Great Crested Flycatcher—no, they keep on calling all summer long. Perhaps this is one of the many reasons why I really like this forest sentinel.

Most flycatchers are smallish, drab in color, and live in open habitats. This is just the opposite of the Great Crested Flycatcher, which is large, about the size of an American Robin, and is festooned with a lemon-yellow belly and bright, rusty-red tail. The name “Great Crested” suggests that it has a large crest on its head, but, compared to more familiar crests on birds such as the Northern Cardinal or the Blue Jay, the flycatcher really doesn’t have much of a crest. 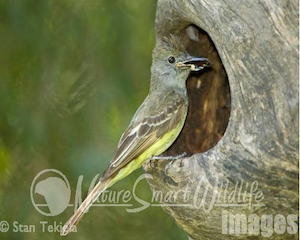 The flycatcher family is the largest family of birds in the world, consisting of more than 400 species. Interestingly, the flycatchers are only found in North, Central, and South America. They are New World Birds and not found in Europe, Africa, or Asia.

Most flycatchers nest in simple, open-cup nests constructed by the mated pair. The nests are often located fairly low to the ground, in shrubs or small trees. Again, this is not the case for the Great Crested Flycatcher. These birds nest in natural tree cavities or old woodpecker holes that are usually very high up in the trees. And the nests are located deep within thick forests. In fact, in my past 30 years as a professional Wildlife Photographer I’ve only located one natural cavity nest. That was until last week, when I was fortunate enough to find a second nest.

This natural cavity (former woodpecker cavity) nest is located in the trunk of an dead tree about 30 feet high. When I first spotted it, I was a long way off and I wasn’t sure what was using the cavity because the bird I saw leaving the nest had a very short tail. Great Crested Flycatchers have long tails. I made my way over to the cavity and sat down to wait and see who or what was coming and going from the nest. 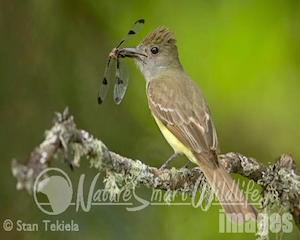 About half an hour later, a bird landed at the entrance to the cavity. Looking through my camera I could see it was indeed a Great Crested Flycatcher, but its tail feathers were worn down to short stubs. After many hours of observation I could deduce that the cavity these birds were nesting in was too small for the female to incubate comfortably with her long tail. No doubt that after many weeks of incubating eggs and now feeding young, this was the reason that her tail feathers were worn down. The male still had his long, beautiful tail feathers.

Over the next week I spent many hours watching and photographing the adults as they brought many insect meals to the young birds within the cavity and removed fecal sacs produced by the babies. I hope it’s not so long before I find another nest of the flycatcher of the forest. Until next time…