The Skunk — A Remarkable Critter

In this week’s column, Stan Tekiela explains a few things about the skunk.

I recently had a lively conversation about skunks with some friends. While explaining a few things about the animal, it occurred to me that skunks are one of those critters that are commonly seen yet rarely given a second thought. So here are some of my favorite facts about this most remarkable critter. 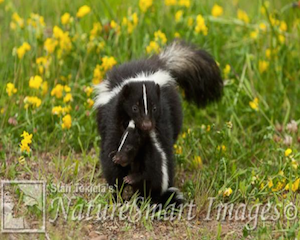 Most people don’t know that there are 12 different kinds of skunks in the world. Ten of the twelve species occur right here in North, Central, and South America. Two of these are found in Indonesia and the Philippines. This just exemplifies the fact that we have so many unique critters right here in America. Our skunks include the Striped Skunk, Eastern Spotted Skunk, Western Spotted Skunk, Hog-nosed Skunk, and Hooded Skunk.

All skunks are crepuscular and nocturnal critters, which means that they are most active during the very early morning and late evening during the twilight hours but also spend a good part of the night hunting for food and water. In warmer parts of the country, they are active year-round; in colder areas where winter is harsh, they will hole up in a den for upwards of a couple months to wait for warmer weather.

Most skunks are a combination of black and white in color. Depending upon the species, skunks are black with either white stripes or spots. However, individuals vary greatly. Some skunks are nearly all black or nearly all white. Stripes can be narrow or very wide, and spots can be many or few.

Skunks are true omnivores, using their noses to lead them to insects, bird eggs, carrion, worms, crayfish, small reptiles and amphibians, and even small mammals such as mice and voles. In late summer and fall they consume a lot of fruits, berries, and nuts. They use their long front claws to dig up insects in dirt or inside rotten logs. Once they find something, they use their sharp, strong teeth to deliver a killing bite.

Skunks spend most of their time on the ground, but they are also able to climb trees. They are not particularly fast at escaping large predators. They use their bold black-and-white markings to first warn predators that they shouldn’t mess with them. If that doesn’t work, they will hiss and stomp their feet. They also spin in circles and, if all else fails, they will turn and lift their tails. They sometimes do a front handstand. Usually at this point it’s too late to evade the inevitable odiferous spray. 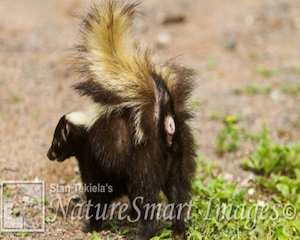 While skunks are reluctant to use their weapons, they can spray up to 5 or 6 times in a row before exhausting their stinky supply. They store about 0.5 ounce (15 cc) or about 1 tablespoon of smelly liquid. It can take many days to produce another supply of the stinky juice. Skunks can spray upwards of 10 feet with amazing accuracy. They will use this defense against anything they feel is threatening their safety.

Skunk spray is composed mainly of three compounds. Each skunk species has a slightly different arrangement of these chemicals, but to our human noses they all smell the same. It is such a strong odor that our noses can detect as little as 10 parts per billion. And it lingers in the air for many hours after being discharged.

Most animals steer clear of skunks. They seem to know that they don’t want to be sprayed. The exception to this is your family dog. For some reason, dogs just run right up to skunks to check them out and receive a blast from the skunk. Dog owners can attest to this stinky fact.

If your dog was unfortunate enough to have an encounter with a skunk, forget about using tomato juice to take away the smell. The best solution is a combination of 1 quart 3% hydrogen peroxide, 1/4 cup baking soda, and 1 teaspoon liquid dishwashing soap. Wear rubber gloves, and wash your dog with the solution, making sure it stays on the dog for upwards of 10 minutes. Do not store the mixture because it could explode later. Until next time…