The Migration of Hummingbirds 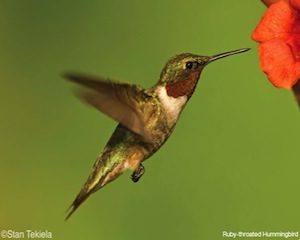 Much of migration remains a great mystery to science. While we can only speculate how it started and why it continues, there are a number of facts we do know. Migration allows an expanded bird population, including hummers, to exploit food resources and breed elsewhere.

Nearly all species of hummingbirds in the United States travel thousands of miles to find food and reproduce with intense competition from others of its own kind. Ruby-throats, for example, fly north after wintering in the tropics of Central and South America and fan out in spring across the eastern United States, where they find many sources of food and breeding opportunities. We also know that hummers return to the region where they hatched. Ruby-throats hatching in Missouri will return to Missouri the next year. Others hatching in Michigan will return to Michigan. 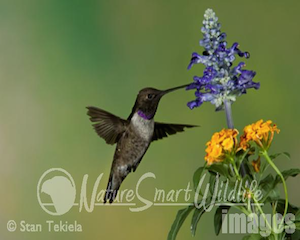 Once at the breeding grounds, hummers look for a suitable territory with enough food to sustain themselves for the entire summer.

Hummingbirds are so small that they often will not migrate on days with a strong headwind. They average approximately 25–30 mph when there is no headwind and increase their speed with a tailwind.

Recent studies show that the return north in spring goes much faster than the trip south in fall. Because the first hummers to arrive at breeding areas are likely to be more successful, this may cause the birds to exert extra effort during the spring trip. It is thought that most migrate about 200–500 feet above the ground when they are trying to make serious mileage. Some people mistakenly think that hummingbirds migrate by hitching rides on the backs of geese. This is a silly old myth that probably started with the idea that a tiny bird could never fly great distances on its own—a notion that is simply false! Hummingbirds are true neotropical migrants, which means they fly to the tropics for the winter.

Geese, on the other hand, migrate just far enough south to find open water, typically a distance of only a couple hundred miles. In northern states, geese often move just to the middle of the country where water stays unfrozen all winter. Hummingbirds fly thousands of miles beyond this point. They also migrate earlier, departing well before geese get the urge to leave.

Check out Stan Tekiela’s compelling photographs and descriptions of these enchanting birds in his book Amazing Hummingbirds: Unique Images and Characteristics. For more stories about wildlife and nature, sign up for our newsletter now!