We are excited to share Stan Tekiela’s first blog post on our website today. Stan will be contributing regularly for your reading pleasure. So, without further ado, here is his post about scary bats—just in time for Halloween! 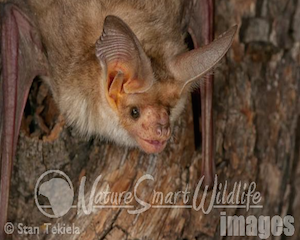 At the end of October, we tend to contemplate scary animals. Well, I guess I understand. After all, Halloween plays a huge part in our culture. But what do you know about Halloween? Very basically, in ancient days, people believed we were switching over from a season of life to a season of death at this time of year. At the end of summer and fall (warm and prosperous seasons), food would become scarce and people naturally worried about surviving another winter. So it makes sense that in the past this was a frightening time of year. It was only later, in more modern times, that we began to associate scary animals with Halloween.

By the way, the name Halloween comes from the fact that November 1st is All Saints Day; therefore, October 31st was the “hallowed eve” before the holiday—Hallow’een. People have always been afraid of things they don’t know much about. If we don’t see or understand something, we often make up stories about it. This is common when it comes to our nocturnal critters, such as bats.

As a naturalist and biologist, I find bats endlessly fascinating. As a general group of animals, they are very successful. There are only about 5,400 species of mammals in the world. About 1,000 are a type of bat. This means that nearly a quarter of all the mammals on Earth are a type of bat. I find that amazing. 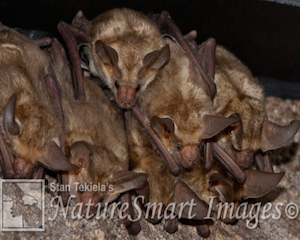 Most of the bats in the northern half of the United States are insect eaters. Bats eat as much as their own body weight in insects each night. In fact, bats eat millions of insects each year, and they do it in nearly complete darkness. They find flying insects by emitting an ultrasonic sound at 10-20 clicks per second and then listening for a return echo. This echolocation is amazing.

Most bat species produce only one pup per year. Yes, a baby bat is called a pup. Remember, they are a type of mammal. Many species of bats give birth in caves, along with thousands (if not tens of thousands) of other mothers at the same time. They leave their babies behind when they go out foraging for food; remarkably, each mother is able to find her very own baby by her pup’s unique sound and smell.

Even though they are small, bats live a very long time. Many bat species can live upwards of 30 years. That is unique because most other mammals of equal size have a lifespan of only 3 or 4 years. 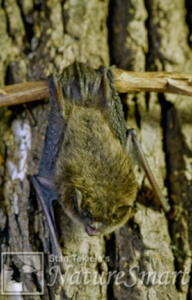 Unfortunately, about half of all the bat species in the United States are on a severe decline in population or are already on the endangered species list. Much of this is from habitat destruction, disturbance at hibernating sites, and, more recently, from a fungal disease called White Nose Syndrome (WNS). An estimated 5.7 million bats have already died from WNS since it was first discovered just 10 or so years ago.

This past spring, Georgia State University stumbled across a promising treatment for bats infected with WNS. While studying ways to slow down the ripening of fruits, such as bananas, for extended shelf life, they discovered a fungus inhibitor that not only worked on the fruit but also on the bats. They exposed infected bats to the fungus inhibitor; by the end of summer, the bats were free of the fungus. While not a cure, it is a promising start to solving a very serious problem. I’m keeping my fingers crossed that this works. 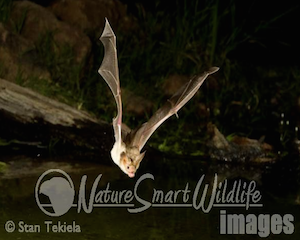 So when you think of Halloween and the scary things that go along with it, don’t worry. Some of our coolest creatures are some of our most interesting.